Putin Orders Suspension of Plutonium Cleanup Program with US

Putin Orders Suspension of Plutonium Cleanup Program with US

Putin Orders Suspension of Plutonium Cleanup Program with US
Russian President Vladimir Putin signed a decree Monday suspending an agreement with the United States on disposing of weapons-grade plutonium.
The decree states the move was taken due to what Moscow calls “a drastic change in circumstances, the emergence of a threat to strategic stability as a result of unfriendly actions by the United States of America with respect to the Russian Federation." It also cites what it says is Washington's failure to fulfill the obligations for the disposal of surplus weapon-grade plutonium.
The deal, initially signed in 2000 and renewed in 2010, called for both nuclear powers to dispose of weapons-grade plutonium from their defense programs.
Conditions for reversal

In a bill submitted Monday to the State Duma, the lower house of Russia’s parliament, the Russian president asked the country's legislators to support the suspension of the plutonium deal.
The bill enumerates steps Washington could take to reverse the agreement's suspension. These include “a reduction of the military infrastructure and the size of the contingent” of U.S. troops stationed in NATO member-states in Eastern Europe, and rescinding the Magnitsky Act, which imposed sanctions on Russian officials deemed responsible for the death of Russian lawyer Sergei Magnitsky in a Moscow prison in 2009.
It also calls for the lifting of all sanctions against Moscow, which would include those imposed for its actions against Ukraine, and compensation for losses caused by those sanctions.
Commenting Monday on the decision to suspend the plutonium agreement, Russia’s Foreign Ministry said the United States took “hostile steps” aimed at undermining Russia’s economy and social stability following the 2014 annexation of Crimea. It also said the build-up of NATO infrastructure and U.S. troops strength near the Russian border “fundamentally changes the strategic balance in Europe and is fraught with increasing military confrontation and tension.”
The Obama administration has done everything possible to “destroy an atmosphere of trust that could stimulate cooperation,” the ministry added. 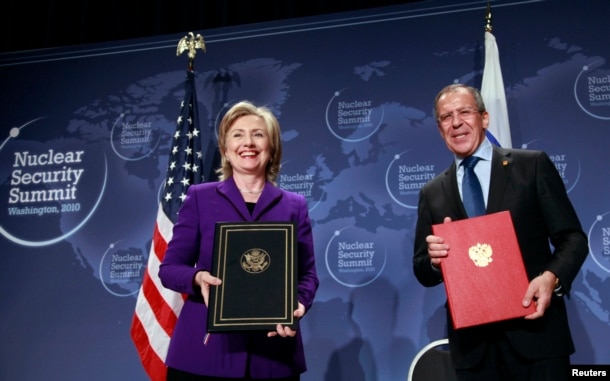 FILE - U.S. Secretary of State Hillary Clinton (L) and Russia's Foreign Minister Sergey Lavrov pose after signing the Plutonium Disposition Protocol during a ceremony at the Washington Convention Center in Washington, April 13, 2010.
The 2010 plutonium agreement, signed by Russian Foreign Minister Sergei Lavrov and then U.S. Secretary of State Hillary Clinton, requires each side to dispose of 34 metric tons of plutonium by burning it in nuclear reactors.
Clinton said that was a quantity large enough to make almost 17,000 nuclear weapons.
Russia and the United States viewed that deal as a sign of increased cooperation between them toward nuclear non-proliferation.
Strained relations

But ties between Moscow and Washington plunged to the lowest point since the Cold War when Russia annexed Crimea from Ukraine in 2014 and has supported pro-Moscow separatists in eastern Ukraine.
Vladimir Batuk, a senior research fellow with the Institute of U.S. and Canadian Studies in Moscow, told VOA that Putin’s decree suspending the plutonium agreement was a very significant step.
"It is, in fact, undermining the process of nuclear disarmament and thus it hinders the Russian -American efforts in the sphere of non-proliferation,” he said. “It seems that every time when we are facing problems in arms control, we see the problems in non-proliferation as well. So,I believe it is very important and will have negative consequences for both arms control and non-proliferation."
http://creditrating.einnews.com/article/347621075/zc-xEt0OSzOmlBdD