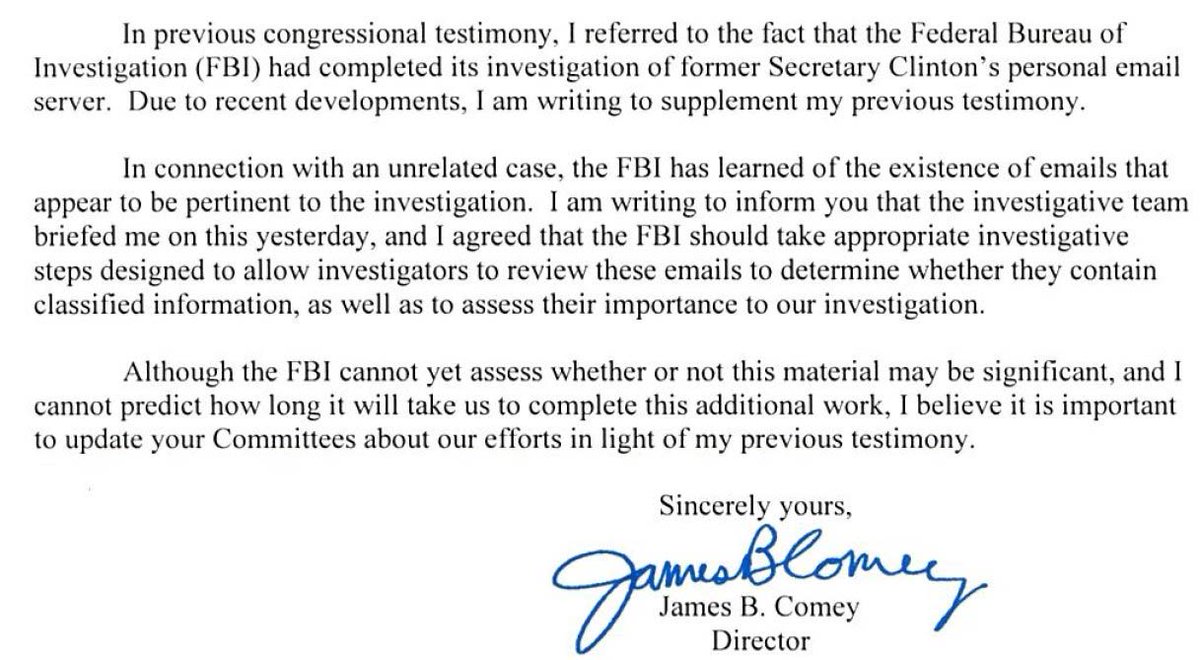 (CNN)FBI Director James Comey told lawmakers Friday the bureau is reviewing new emails related to Hillary Clinton's personal server, a development that shook her campaign 11 days before the election.
The emails being examined are part of an investigation into Anthony Weiner, according to law enforcement sources. Weiner, the disgraced former congressman, recently separated from top Clinton aide Huma Abedin after a sexting incident.

The FBI and the New York Police Department have opened preliminary investigations of allegations that the former New York Democratic congressman exchanged sexually explicit text messages with a purportedly underage girl.
The FBI is looking at whether any of the newly discovered emails will have an impact on the investigation into Clinton's server that was closed earlier this year.
After recommending in July that the Department of Justice not press charges against the former secretary of state, Comey said in a letter to eight congressional committee chairmen Friday that investigators are examining newly discovered emails that "appear to be pertinent" to the email probe.
"In connection with an unrelated case, the FBI has learned of the existence of emails that appear pertinent to the investigation," Comey wrote the chairmen. "I am writing to inform you that the investigative team briefed me on this yesterday, and I agreed that the FBI should take appropriate investigative steps designed to allow investigators to review these emails to determine whether they contain classified information, as well as to assess their importance to our investigation."
Comey said he was not sure how long the additional review would take and said the FBI "cannot yet assess whether or not this material may be significant."
Clinton campaign chairman John Podesta pressed Comey to release more information about the emails.
"FBI Director Comey should immediately provide the American public more information than is contained in the letter he sent to eight Republican committee chairmen," Podesta said. "Already, we have seen characterizations that the FBI is 'reopening' an investigation but Comey's words do not match that characterization. Director Comey's letter refers to emails that have come to light in an unrelated case, but we have no idea what those emails are and the Director himself notes they may not even be significant. It is extraordinary that we would see something like this just 11 days out from a presidential election."
Comey felt he had no choice but to tell Congress now or risk being accused of hiding relevant information before the election, law enforcement officials said in explaining the timing. The letter was "carefully worded," one of the officials said.
The Department of Justice, which followed Comey's recommendation not to charge Clinton, declined to comment Friday.
Law enforcement sources say the newly discovered emails are not related to WikiLeaks or the Clinton Foundation. They would not describe in further detail the content of the emails. A law enforcement official said the newly discovered emails were found on an electronic device that the FBI didn't previously have in its possession.
The news is a major development unfolding in the final stretch of the campaign, uniting Republicans and putting the Clinton campaign on defense. GOP nominee Donald Trump and other prominent Republicans, such as Speaker Paul Ryan, jumped on Comey's announcement to blast Clinton.
Clinton's campaign learned of the news while they were aboard a flight to Iowa.
"We're learning about this just like you all are," a Clinton aide told CNN.
The Democratic nominee has the advantage in the race for the 270 electoral votes needed to capture the presidency. She is leading Trump by six points in CNN's Poll of Polls. The question now is whether the return of the email storm, which has overshadowed her entire campaign, will have an impact on any remaining undecided voters.
Republicans: No honeymoon if Clinton wins
"Hillary Clinton's corruption is on a scale we've never seen before," Trump said at a rally in Manchester, New Hampshire. "We must not let her take her criminal scheme into the Oval Office."
Trump's campaign manager, Kellyanne Conway, tweeted after the news broke, "A great day in our campaign just got even better."
Ryan said Clinton betrayed Americans' trust for handling "the nation's most important secrets."
"This decision, long overdue, is the result of her reckless use of a private email server, and her refusal to be forthcoming with federal investigators," Ryan said in a statement. "I renew my call for the Director of National Intelligence to suspend all classified briefings for Secretary Clinton until this matter is fully resolved."
Despite lashing Clinton's email practices as "extremely careless," Comey declined over the summer to recommend prosecution. That move was instantly lambasted by Republicans -- some of whom decried the department's politicization. Comey eventually was called to Capitol Hill to testify and defend the FBI's integrity and decision process.

i'm thinking he caved to public opinion and public outrage. anybody else?
Lobo

Something happened and I think he is "buying time" to see who won and to have emergency plans in place to leave the country.
fonz1951

Lobo wrote:Something happened and I think he is "buying time" to see who won and to have emergency plans in place to leave the country.

he could be smarter than we give him credit for.