Obama: "We have come close to goal of dismantling al Qaeda" 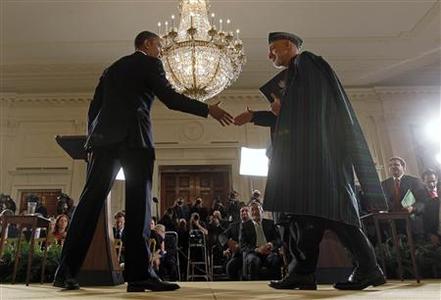 
(Reuters) - President Barack Obama and Afghan President Hamid Karzai
agreed on Friday to speed up the handover of combat operations in Afghanistan
to Afghan forces, raising the prospect of an accelerated U.S.
withdrawal from the country and underscoring Obama's determination to
wind down a long, unpopular war.

Signaling a narrowing of
differences, Karzai appeared to give ground in talks at the White House
on U.S. demands for immunity from prosecution for any U.S. troops who
stay in Afghanistan beyond 2014, a concession that could allow Obama to
keep at least a small residual force there.
Both
leaders also threw their support behind tentative Afghan reconciliation
efforts with Taliban insurgents, endorsing the establishment of a
Taliban political office in Qatar in hopes of bringing insurgents to
inter-Afghan talks.
Outwardly, at
least, the meeting appeared to be something of a success for both men,
who need to show their vastly different publics they are making progress
in their goals for Afghanistan. There were no signs of the friction
that has frequently marked Obama's relations with Karzai.
Karzai's
visit came amid stepped-up deliberations in Washington over the size
and scope of the U.S. military role in Afghanistan once the NATO-led
combat mission concludes at the end of next year.
"By
the end of next year, 2014, the transition will be complete," Obama
said at a news conference with Karzai standing at his side. "Afghans
will have full responsibility for their security, and this war will come
to a responsible end."
The Obama
administration has been considering a residual force of between 3,000
and 9,000 troops - far fewer than some U.S. commanders propose - to
conduct counterterrorism operations and to train and assist Afghan
forces.
But a top Obama aide said
this week that the administration does not rule out a complete
withdrawal after 2014, a move that some experts say would be disastrous
for the weak Afghan central government and its fledgling security
apparatus.
Obama on Friday left
open the possibility of that so-called "zero option," when he several
times used the word "if" to suggest that a post-2014 U.S. presence was
far from guaranteed.
Insisting that
Afghan forces were "stepping up" faster than expected, Obama said
Afghan troops would take over the lead in combat missions across the
country this spring, rather than waiting until the summer, as was
originally planned. NATO troops will then assume a "support role," he
said.
"It will be a historic moment and another step toward full Afghan sovereignty," Obama said.
Obama
said final decisions on this year's troop cuts and the post-2014 U.S.
military role were still months away, but his comments suggested he
favors a stepped-up withdrawal timetable.
There
are some 66,000 U.S. troops currently in Afghanistan. Washington's NATO
allies have been steadily reducing their troop numbers as well, despite
doubts about the ability of Afghan forces to shoulder full
responsibility for security.
"WAR OF NECESSITY"
Karzai
voiced satisfaction over Obama's agreement to turn over control of
detention centers to Afghan authorities, a source of dispute between
their countries, although the White House released no details of the
accord on that subject.
Obama once
called Afghanistan a "war of necessity," but he is heading into a
second term looking for an orderly way out of the conflict, which was
sparked by the September 11, 2001 attacks by al Qaeda on the United
States.
He faces the challenge of
pressing ahead with his re-election pledge to continue winding down the
war while preparing the Afghan government to prevent a slide into chaos
and a Taliban resurgence once most NATO forces are gone.
Former Senator Chuck Hagel, Obama's nominee to become defense secretary, is likely to favor a sizable troop reduction.
Karzai,
meanwhile, is eager to show he is working to ensure Afghans regain full
control of their territory after an foreign military presence of more
than 11 years.
Asked whether the
cost of the war in lives and money was worth it, Obama said: "We
achieved our central goal ... or have come very close to achieving our
central goal, which is to de-capacitate al Qaeda, to dismantle them, to
make sure that they can't attack us again."
He
added: "Have we achieved everything that some might have imagined us
achieving in the best of scenarios? Probably not. This is a human
enterprise, and you fall short of the ideal."
Obama
made clear that unless the Afghan government agrees to legal immunity
for U.S. troops, he would withdraw them all after 2014 - as happened in
Iraq at the end of 2011.
Karzai,
who criticized NATO over civilian deaths, said that with Obama's
agreement to transfer detention centers and the planned withdrawal of
U.S. forces from Afghan villages, "I can go to the Afghan people and
argue for immunity" in a bilateral security pact being negotiated.
Many
of Obama's Republican opponents have criticized him for setting a
withdrawal timetable and accuse him of undercutting the U.S. mission by
reducing troop numbers too quickly.
Karzai
and his U.S. partners have not always seen eye to eye, even though the
American military has been crucial to preventing insurgent attempts to
oust him.
In October, Karzai
accused Washington of playing a double game by fighting the war in
Afghan villages instead of going after insurgents who cross the border
from neighboring Pakistan.
In
Friday's news conference, Karzai did not back down from his previous
comments that foreigners were responsible for some of the official
corruption critics say is rampant in Afghanistan. But he acknowledged:
"There is corruption in the Afghan government that we are fighting
against."
Adding to tensions has
been a rash of deadly "insider" attacks by Afghan soldiers and police
against NATO-led troops training or working with them. U.S. forces have
also been involved in a series of incidents that enraged Afghans,
including burning Korans, which touched off days of rioting.
(Additional
reporting by Roberta Rampton, Mark Felsenthal, Jeff Mason, Phil
Stewart, Tabassum Zakaria, David Alexander; Editing by Warren Strobel
and David Brunnstrom)

» Washington calls to accelerate the exchange of prisoners in Afghanistan because of Corona
» Pentagon plans to resume combat operations in Afghanistan
» Abadi meets Trump at the Oval House and agrees on the continuation of the partnership in the war aga
»  Obama Approves Expanded U.S. Military Powers In Afghanistan
» Afghanistan: Obama Sends Marines to Take Part in America’s Longest Ever War