By Richard Gray for MailOnline
Published: 11:47 EST, 4 August 2015 | Updated: 17:48 EST, 4 August 2015
It was the Biblical city where the giant Goliath lived and one of the most powerful in the Philistine empire before it was destroyed in the ninth century BC.
Archaeologists have now uncovered the remains of an enormous gate and fortified wall which are giving clues to just how formidable the city of Gath may have been.
The monumental gate is the largest to ever be found in Israel and much like its most famous inhabitant – Goliath - it would have intimidated any who approached it.
Scroll down for video 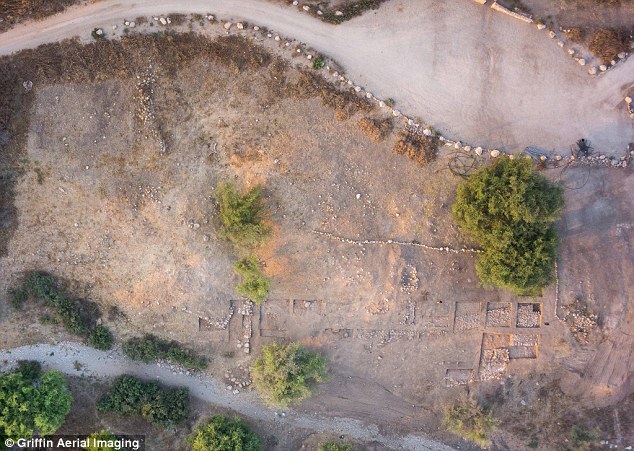 +6
Archaeologists have discovered the remains of what they say is a monumental gate at the entrance to the Biblical city of Gath. They say the gate is the largest to be discovered in Israel. The aerial photograph above shows the remains of the gate and surrounding fortifications that have been unearthed
The gate of Gath is referred to in the Hebrew Bible in the story of David's escape from King Saul to Achish, the King of Gath.
Alongside the gate, researchers found the remains of a fortified wall with a temple and an iron production facility behind it.


THE BIBLE ON THE GATE OF GATH

There is just one reference to the gate of Gath in the book of Samuel in the Hebrew Bible.
It depicts the story of David fleeing from King Saul, who has tried to have him killed.
It reads: 'David rose and fled that day from Saul; he went to King Achish of Gath.
'The servants of Achish said to him, 'Is this not David the king of the land? Did they not sing to one another of him in dances, 'Saul has killed his thousands, and David his ten thousands'?'
'David took these words to heart and was very much afraid of King Achish of Gath.
'So he changed his behavior before them; he pretended to be mad when in their presence. He scratched marks on the doors of the gate, and let his spittle run down his beard.
'Achish said to his servants, 'Look, you see the man is mad; why then have you brought him to me?
''Do I lack madmen, that you have brought this fellow to play the madman in my presence? Shall this fellow come into my house?'''
Writing on the team's blog , Professor Aren Maeir, an archaeologist from Bar-Ilan University in Israel who has been leading the excavation, said: 'It appears we have located a monumental city gate of the lower city of Gath.
'We still have to do a lot of cleaning, defining, digging and measuring to do, but it appears that there are really good chances we have truly landed on quite an astounding find.
'Many lines of megalithic stone are appearing, with nice corners, features and even mud bricks.
'While we are quite far from fully understanding this architectural complex, it is getting more and more impressive.
The more we look at the area – the larger these features appear to be
The remains of the city were discovered in the close to the village of Tell es-Safi in the Tel Zafit National Park, in the Judean foothills between Jerusalem and Ashkelon in Israel.
The city of Gath was one of five Philistine city-states and according to the Bible was the home of King Ashish and the Philistine warrior Goliath, who was killed by David.
It is thought to have been a powerful city during the time of Saul, David and Solomon around 3,000 years ago.
However, it was likely destroyed following a siege by Hazael King of Aram Damascus around 830 BC. 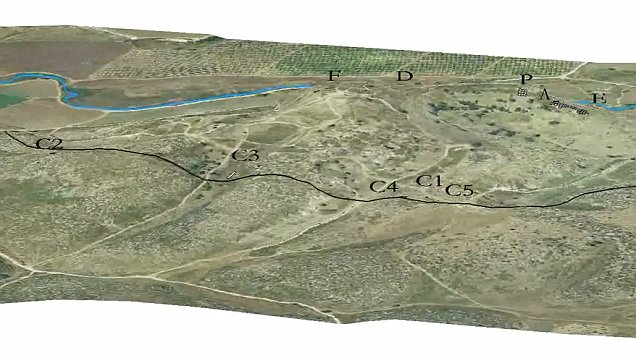 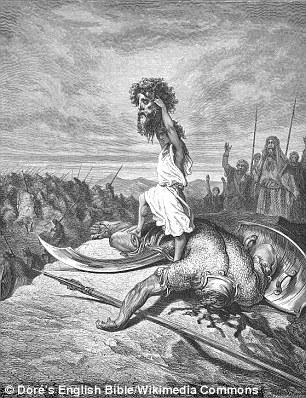 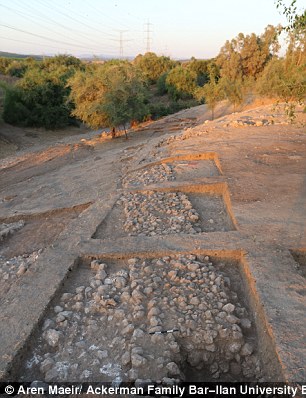 +6
The city of Gath was supposed to be the home of Goliath, who was killed by David, as illustrated in the drawing by Gustave Doré on the left. Archaeologists have uncovered fortifications either side of of the gate, shown on the right, which they say would have made it a formidable place to attack
Professor Maeir and his colleagues say they have found evidence of the widespread destruction that took place in the city after the siege.
The site has been excavated for nearly 20 years now under the Ackerman Family Bar-Ilan University Expedition.
They have also found evidence of an earthquake which damaged the city in the 8th century BC and may be the disaster mentioned in the Book of Amos in the Hebrew Bible. 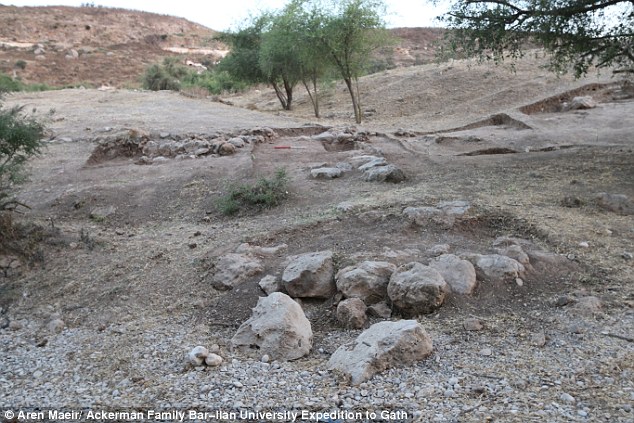 +6
Large stone blocks used to construct the gateway have been unearthed. The city of Gath was one of the most powerful in the area at the time before it was destroyed in 830BC by the King of Aram Damascus, Hazael 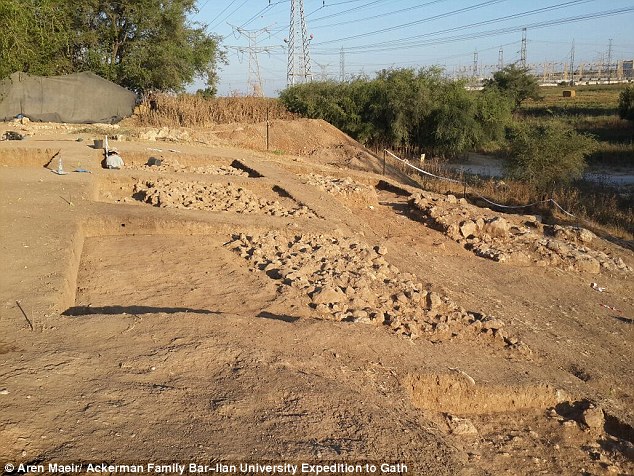 +6
Researchers have also found signs that there was large amounts of iron working being done in the area close to the gate. The image above shows a section of the ancient wall that surrounded the city of Gath
They have also found the earliest decipherable Philistine inscription, which includes two names similar to the name Goliath.
Professor Maeir and his team this year uncovered the gate and around 98 feet (30 metres) of the surrounding fortifications, which have been built with huge blocks of stones.
They say there appears to have been extensive iron smelting and working going on in the lower part of the city, close the gate during the 10th and 9th century BC before the city was destroyed. 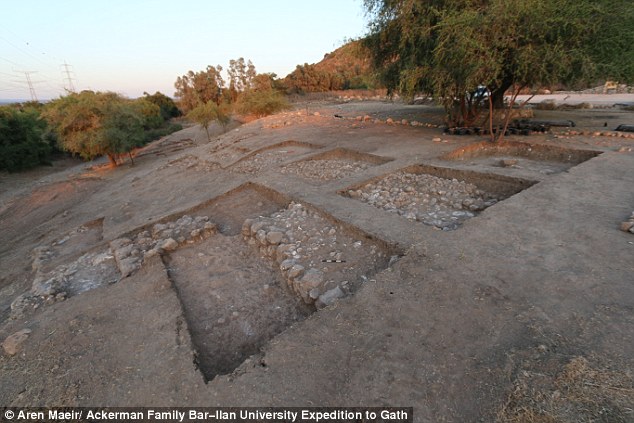 +6
The excavation also uncovered buildings close to the gate and the fortified wall, shown in the image above

This is very  interesting! Thanks Lobo

I just love it when the Bible is proven to be true among all the naysayers.  The Holy Word of God, nothing better.

» Targeting Al-Halbousi's house... A new warning to "stay away" from Al-Sadr

» Al-Kazemi commenting on the bombing of Baghdad International Airport: a new attempt to undermine Ira

» Al-Amiri calls for consensus on the Prime Minister and the management of the next stage: This stubbo

» Legal expert: Attacks on embassies and airports may expose Iraq to international sanctions

» The Sadrist bloc threatens the Baghdad airport targets: We will rid Iraq of uncontrolled weapons

» Iraqis subjected to blackmail at the Turkish embassy

» Al-Amiri: Disagreement over the prime minister will lead to a dead end

» Once again, Iran is "not satisfied" with the volume of trade exchange with Iraq: a desire to triple

» Al-Fateh: The Position Of The President Of The Republic Is Exclusively Owned By The National Union

» Al-Fateh: The Coordination Framework Cannot Be Ignored, And Most Of The “Political Process Hawks” Wi

» Kurdish Politician: Zebari Was Nominated For The Presidency Because He Is "Uncle" Barzani

» Al-Ittihad: We Will Compete With The Democrat In Their Positions If We Lose The Presidency

» Al-Maslamawi: We Are Able To Absorb The Unemployed In The Center And South Through Investment Projec

» The presidency of the Iraqi parliament questions the legality of recently concluded oil contracts..

» Qaani discusses healing the Shiite rift in Baghdad... and a surprise about the "meeting" of Al-Amiri

» Al-Amiri urges the two poles of Kurdistan to resolve differences: it is reflected in all of Iraq

» Masjedi: The Fifth Round Of Iranian-Saudi Negotiations Will Be Held Soon In Baghdad

» He Demanded A Travel Ban.. Deputy: Al-Kazemi Has Exceeded The Duties Of The Caretaker Government

» Representative Of The State Of Law: The Door To Negotiations With The Sadrist Movement Has Been Clos

» Globally, Oil Records A New High And Approaches $91 A Barrel

» A Deputy Reveals A Large Inflation In Prices, And Baghdad Leads By 80%

» Source: The coordination framework will go to the opposition... But!

» Al-Qabbanji: The parties should resort to the constitution and adopt benefits

» The repercussions of targeting Baghdad airport.. Al-Abadi warns of "sedition"

» Al-Abadi: Beware of sedition, and the state is not built by claiming, bullying, and exclusion