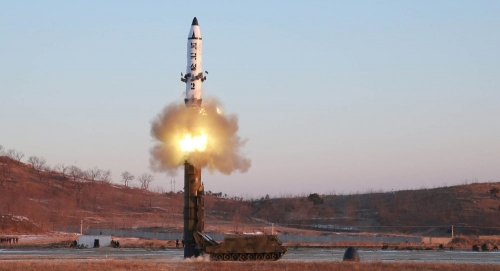 [Where - Continue]
Washington called on the international community to sever diplomatic and trade ties with Pyongyang, pledging to the United States ambassador to the United Nations, Nikke Hailey, to destroy the entire North Korean regime.
"The North Korean regime will be completely destroyed if war breaks out," Hailey said at an emergency Security Council session to discuss the latest North Korean missile launch.
The US spokeswoman said Pyongyang, by launching an intercontinental ballistic missile, "chose aggression" instead of the peace process.
"North Korea's behavior is becoming increasingly intolerable," she said.
The UN's chief political officer, Geoff Riveltman, met with North Korean envoy Ja Song Nam on Wednesday and told him that his country should "stop making any other destabilizing moves" after Pyongyang fired a new ballistic missile.
"During the meeting I stressed that nothing is more dangerous to peace and security in the world than what is happening now on the Korean Peninsula," Feltman told the UN Security Council at a meeting on the new missile test.

The United States on Thursday called on all countries to sever diplomatic and trade ties with North Korea.
"The North Korean regime will be completely destroyed" if "war breaks out," US Ambassador to the United Nations Nikke Hailey warned.
"Pyongyang, by launching an intercontinental ballistic missile, chose aggression instead of the peace process," she said during an emergency Security Council session on Wednesday to discuss the latest North Korean missile launch. "North Korea's behavior has become increasingly intolerable. "He said.
The US ambassador called on China to refrain from supplying oil to Pyongyang, saying that North Korea still "gets petroleum products through ship-to-sea transfers."
"We must continue to treat North Korea as a pariah country," she said.
Washington announced that North Korea was launching a new intercontinental ballistic missile, which wants to impose new sanctions on Pyongyang, but did not address the issue of sanctions during its intervention in the UN Security Council.
Russian Ambassador to the United Nations Vasily Nabnasia acknowledged that there was "provocation" by the missile, stressing that "there is no military solution" to the crisis with North Korea.
"Russia can not accept the nuclear situation of North Korea," he said.
On Wednesday, North Korea tested a new type of missile that could target the entire American continent and declared it a full nuclear state.
The test, the first by Pyongyang since September 15, is a blow to US President Donald Trump, who said the development of these capabilities "will not happen."
http://www.aljournal.com/%D9%88%D8%A7%D8%B4%D9%86%D8%B7%D9%86-%D8%AA%D8%AA%D9%88%D8%B9%D8%AF-%D8%A8%D9%80%D8%AA%D8%AF%D9%85%D9%8A%D8%B1-%D8%A7%D9%84%D9%86%D8%B8%D8%A7%D9%85-%D8%A7%D9%84%D9%83%D9%88%D8%B1%D9%8A-%D8%A7/