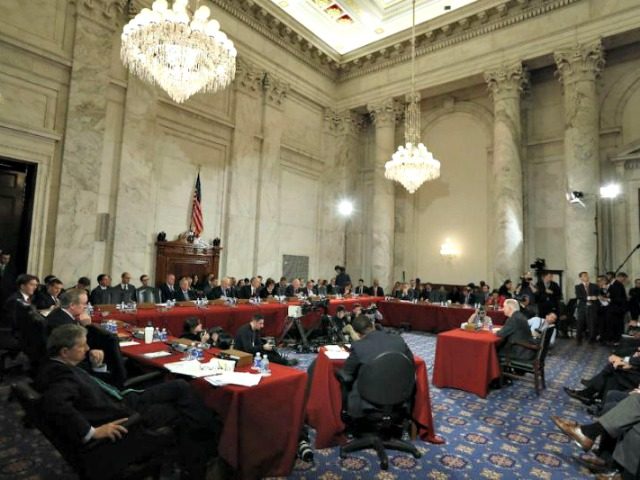 On Obama’s first day in office, Jan. 20, 2009, seven cabinet secretaries were confirmed. Trump team officials say they hope the U.S. Senate will equal or better that number on Jan. 20, 2017, the onset of the Trump administration.
Going into the final week of the transition, seven cabinet officers are scheduled to testify before senators on Capitol Hill.
Tuesday: Interior Secretary-designate Rep. Ryan Zinke (R.-Mont.) — Energy and Natural Resources Committee — and Education Secretary-designate Elizabeth “Betsy” DeVos — Health, Education, Labor and Pensions Committee.
Zinke is expected to channel his hero, fellow outdoors sportsman and warrior President Theodore Roosevelt, who championed both conservation and development of resources. Zinke is always introduced as a combat veteran of the Navy SEALs, but he is also a geologist, who as Montana’s sole congressman went mano-a-mano with federal regulators on behalf of his state’s mineral industry.
Wednesday: Commerce Secretary-designate Wilbur Ross — Commerce, Science and Transportation Committee; Labor Secretary-designate Oklahoma Attorney General E. Scott Pruitt — Environmental and Public Works Committee; Health and Human Services Secretary-designate Rep. Thomas E. Price (R.-Ga.) — Health, Education, Labor and Pensions Committee; and South Carolina Gov. Nikki Haley — Senate Foreign Relations Committee.
In Wednesday’s Foreign Relations hearing with Secretary of State-designate Rex Tillerson, Sen. Marco Rubio (R.-Fla.) was just short of abusive, treating Tillerson like he was cross-examining a hostile witness. It should be a different story one week later, when Rubio questions Haley. Haley endorsed Rubio in the South Carolina primary and campaigned for the Florida senator.
Haley should also surprise senators unfamiliar with her foreign policy savvy, bolstered by successful trade missions on behalf of businesses in her state and her 10-day visit to India, shortly after the Indian-American was reelected governor of the Palmetto State in 2014.
Regardless of Rubio’s vote, there is 100 percent confidence that Tillerson wins confirmation, and Foreign Relations Chairman Sen. Robert P. Corker Jr. (R.-Tenn.) told Breitbart News he expects Democrats to vote for Tillerson, as well.
Thursday: Energy Department-designate Texas Gov. J. Richard “Rick” Perry — Energy and Natural Resources Committee.
The transition is now the size of a medium-size company with 500 individuals working in different areas. Two hundred are paid staff, and 300 are volunteers. Eighty-five people are dedicated to the confirmation process full-time, but 351 different people role-played senators for the confirmation practice sessions.
There were 40 practice hearings for the Trump nominees, including 15 in the first week of January.
Nominees clocked roughly 100 hours of confirmation hearing preparation with a total of 4,830 questions and each nominee fielding an average of 123 questions per session.
This week’s busy schedule follows a busy last week, with not just Tillerson but incoming Attorney General Sen. Jeff Sessions having his confirmation hearing, as well as incoming Homeland Security Secretary Gen. John Kelly having his, incoming Housing and Urban Development Secretary Dr. Ben Carson having his, incoming Defense Secretary Gen. James “Mad Dog” Mattis having his, and incoming Transportation Secretary Elaine Chao having hers. That means in total more than a dozen cabinet nominees may see confirmation votes right after the inauguration on Friday at noon, or in the days immediately following.
http://www.breitbart.com/big-government/2017/01/16/trump-transition-team-in-high-gear-heading-into-inauguration-day/