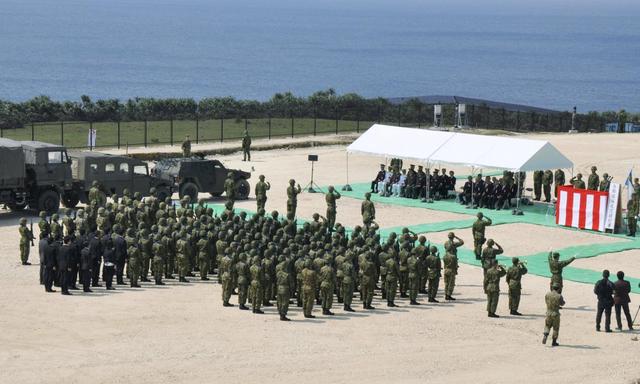 Members of Japan's Self Defence Force hold an opening ceremony of a new military base on the island of Yonaguni in the Okinawa prefecture, March 28, 2016.
Reuters/Kyodo
Japan opens radar station close to disputed isles,...X


By Nobuhiro Kubo and Tim Kelly

YONAGUNI, Japan (Reuters) - Japan on Monday switched on a radar station in the East China Sea, giving it a permanent intelligence gathering post close to Taiwan and a group of islands disputed by Japan and China, drawing an angry response from Beijing.

The new Self Defence Force base on the island of Yonaguni is at the western extreme of a string of Japanese islands in the East China Sea, 150 km (90 miles) south of the disputed islands known as the Senkaku islands in Japan and the Diaoyu in China.

China has raised concerns with its neighbors and in the West with its assertive claim to most of the South China Sea where the Philippines, Vietnam, Malaysia, Taiwan and Brunei have overlapping claims. Japan has long been mired in a territorial dispute with China over the East China Sea islands.

"Until yesterday, there was no coastal observation unit west of the main Okinawa island. It was a vacuum we needed to fill," said Daigo Shiomitsu, a Ground Self Defence Force lieutenant colonel who commands the new base on Yonaguni.

"It means we can keep watch on territory surrounding Japan and respond to all situations."

Shiomitsu on Monday attended a ceremony at the base with 160 military personnel and around 50 dignitaries. Construction of some buildings, which feature white walls and traditional Okinawan red-tiled roofs, is still unfinished.

The 30-sq-km (11-sq-mile) island is home to 1,500 people, who mostly raise cattle and grow sugar cane. The Self Defence Force contingent and family members will increase the population by a fifth.

"This radar station is going to irritate China," said Nozomu Yoshitomi, a professor at Nihon University and a retired major general in the Self Defence Force.

In addition to being a listening post, the facility could be used a base for military operations in the region, he added.

China's defense ministry, in a statement sent to Reuters about the radar station, said the international community needed to be on high alert to Japan's military expansion.

"The Diaoyu Islands are China's inherent territory. We are resolutely opposed to any provocative behavior by Japan aimed at Chinese territory," it said.

"The activities of Chinese ships and aircraft in the relevant waters and airspace are completely appropriate and legal."

The listening post fits into a wider military build-up along the island chain, which stretches 1,400 km (870 miles) from the Japanese mainland.

Policy makers last year told Reuters it was part of a strategy to keep China at bay in the Western Pacific as Beijing gains control of the South China Sea.

"A network of overlapping radar sites along the island chain would boost Japan's ability to monitor the East China Sea," he added.

Yonaguni is only around 100 km (62 miles) east of Taiwan, near the edge of a controversial air defense identification zone set up by China in 2013.

Over the next five years, Japan will increase its Self Defence Force in the East China Sea by about a fifth to almost 10,000 personnel, including missile batteries that will help Japan draw a defensive curtain along the island chain.

Chinese ships sailing from their eastern seaboard must pass through this barrier to reach the Western Pacific, access to which Beijing needs both as a supply line to the rest of the world's oceans and for naval power projection.

» China opens inquiry into steel imports from Europe, Korea and Japan
» Russia may deploy Arctic radar station due to proximity of US nuclear subs
» China to turn disputed south isles into tourist attraction
» Assad's adviser: The war is drawing to a close
» Sky is the Limit: China to Buy Russian Su-35 With Modernized Radar Systems