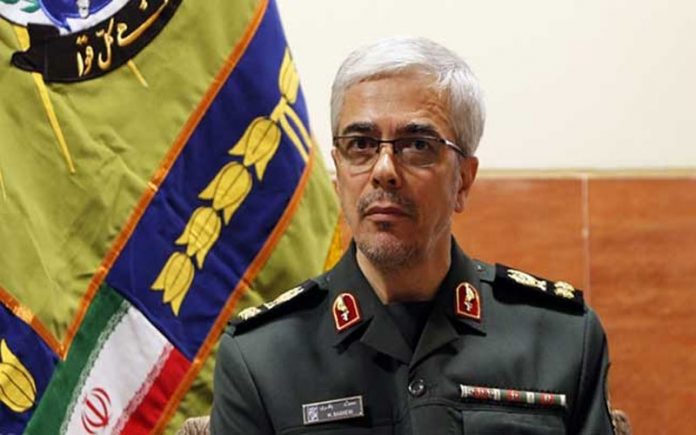 Information / Baghdad ..
The head of the armed forces of Iran, Major General Mohammad Baqri, on Thursday, the readiness of the Iranian armed forces to stand in front of any attempt to find a new sedition, such as "da'ash", during a letter addressed to the Leader of the Islamic Revolution, Ali Khamenei.
"In the wake of the great victory of the Islamic Resistance Front (FIS) and the fall of the alleged Al-Qaeda caliphate, the Chief of Staff of the Iranian Armed Forces, Major General Mohammad Baqari, sent a congratulatory message to the Leader of the Islamic Revolution declaring the readiness of the armed forces to stand up to the rise Any new sedition as a serious predator. "
Major General Bagheri referred to "Khamenei's directives to prepare to confront any new schemes of enemies, stressing all efforts to prevent the emergence of new strife of enemies through full readiness to ensure defeat of enemies in the future."
He stressed that "the armed forces of the Islamic Republic of Iran will maintain the unity of the country and independence and national security and defend the revolution and the Islamic regime and will protect the defensive deterrent capability of the country so that the enemy front remains unable to the strength and strength of the country." Ending / 25
http://www.almaalomah.com/2017/11/23/257590/