Johnson South Reef features a small port and two helipads.
China has nearly finished building an airstrip that could be used for military purposes on one of its biggest artificial islands in the disputed South China Sea, according to satellite images released by a US think tank yesterday.
The Centre for Strategic and International Studies (CSIS) said images taken on June 28 by DigitalGlobe showed China had almost completed the construction of a 3,000-metre airstrip at Fiery Cross Reef, which China calls Yongshu Reef.
The defence ministry refused to comments on the CSIS report, while foreign ministry spokeswoman Hua Chunying said she was not aware of its details. On Tuesday, Hua said China's facilities in the disputed waters were built mainly for civilian purposes, but "necessary military defence requirements will also be fulfilled".
CSIS analysts said the satellite images showed that the airstrip had been surfaced and marked, and an apron and taxiway had been added adjacent to the runway. Previous photos showed a small lake in the middle of the island with additional support facilities, including a naval vessel, the analysts said. 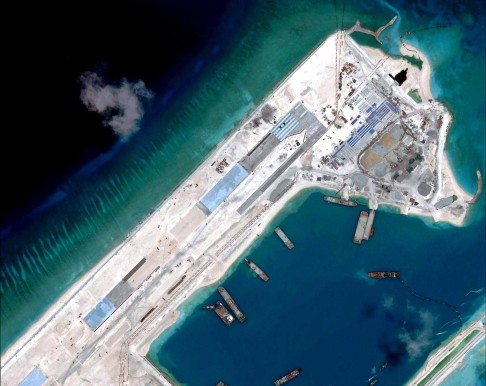 Satellite image of Chinese reclamation work at Fiery Cross Reef. Photo: Reuters It said the facilities on Johnson South Reef, or Chigua Reef in Chinese, now included a small port with limited berth space and two loading stations, two helipads, three possible satellite communication antennae, one large multi-level facility and two possible radar towers. There were also six possible security and surveillance towers for weapons and or sensors, as well as other facilities, raising concerns that Beijing was pushing ahead with its plan to expand its military presence in the area.
China is also appearing to put pressure on Japan in the East China Sea, where it is embroiled in territorial disputes with Tokyo. GlobalDigital said its satellite images also showed China was developing a dozen drone bases in its territorial waters.
A source close to the Fujian military region told the South China Morning Post that the navy had conducted an unprecedented massive drill off its east coast last month, targeting Japan's Maritime Self-Defence Force.
Shanghai-based naval expert Ni Lexiong said China would not abandon its military build-up in the South China Sea, where the new facilities would extend the People's Liberation Army's strategic reach by more than 1,500km from its naval base in Sanya , Hainan province.
CSIS senior adviser Bonnie Glaser said Washington had demanded Beijing halt construction and militarisation, which "the Chinese show no indication of willingness to do".
But Glaser expected a short-term lull in construction over the summer typhoon season in the South China Sea ahead of President Xi Jinping's first state visit to the US in September.
Beijing was "attaching priority to having a successful summit" between Xi and his US counterpart Barack Obama, she said. 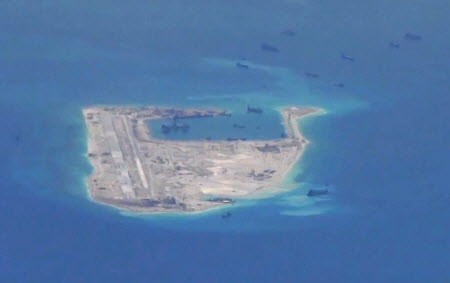 A picture taken in May by the US Navy of Chinese reclamation work at Fiery Cross Reef. Photo: Reuters Chinese military and maritime experts agreed that Beijing might bring a temporary halt to construction on the islands in the next two months to ease tensions before Xi's US trip.
"But China will absolutely pick up its construction again soon after Xi returns from the US, because the artificial islands in the South China Sea are key to China's 'One Belt, One Road' campaign," said Jin Yongming, director of the Shanghai Academy of Social Sciences' Centre for China Marine Strategy Studies, referring to Beijing's initiatives to boost trade and infrastructure links throughout Asia.
"In order to win trust from its Asian neighbours, Beijing will focus more on construction for civilian purposes such as facilities for maritime search and rescue, navigation aids and lighthouses."
CSIS said land reclamation appeared to have finished on five of the seven artificial islands in the South China Sea, but other images taken early last month showed reclamation was ongoing on Mischief and Subi reefs.
http://www.worldaffairsjournal.org/content/china-close-finishing-airstrip-reclaimed-south-china-sea-island-us-think-tank

» Al-Dulaimi: There are intentions behind the leaking of the presidential presidency to the photos of

» Former MP: Sunnis do not believe in the establishment of the Sunni region and their threats are to p

» Deputy: Allawi came with a deal from the President of the Republic

» Al-Fatlawi: We are able to pass the government and seek national unity to vote on it

» Two companies are competing for its implementation .. Atta: Baghdad Metro Project in the stage of co