relationship with an Iraqi event .. A huge reward from the FBI to those who contribute to the arres

relationship with an Iraqi event .. A huge reward from the FBI to those who contribute to the arres

[size=32]
relationship with an Iraqi event .. A huge reward from the FBI to those who contribute to the arrest of Iran[/size]


Twilight News / The FBI has announced the allocation of a huge reward of $ 3 million to those who contribute to reporting information leading to the arrest or conviction of an Iranian citizen.

According to the FBI, the Iranian man named Hussein Ahmed Larijani, aged 55.

In 2010, Larijani was charged with exporting wireless transmitters and receivers manufactured by a company in the US state of Minnesota, which has yet to be identified, illegally.

The FBI explained that these wireless units were later integrated into explosive devices targeting US and coalition forces in Iraq from 2008 to 2010. "
According to the FBI, Washington believes that Larijani lives in the Iranian capital Tehran.

The authorities said Larijani had set up a plan to ship 6,000 transmission units to Singapore under the guise of using them in a telecommunications project.
"Instead, Larijani shipped these devices to Iran, and used them in IEDs that targeted US and coalition forces in Iraq."
According to the channel "free" America, "Three accused of Singapore with guilt, while still fourth in Singapore." 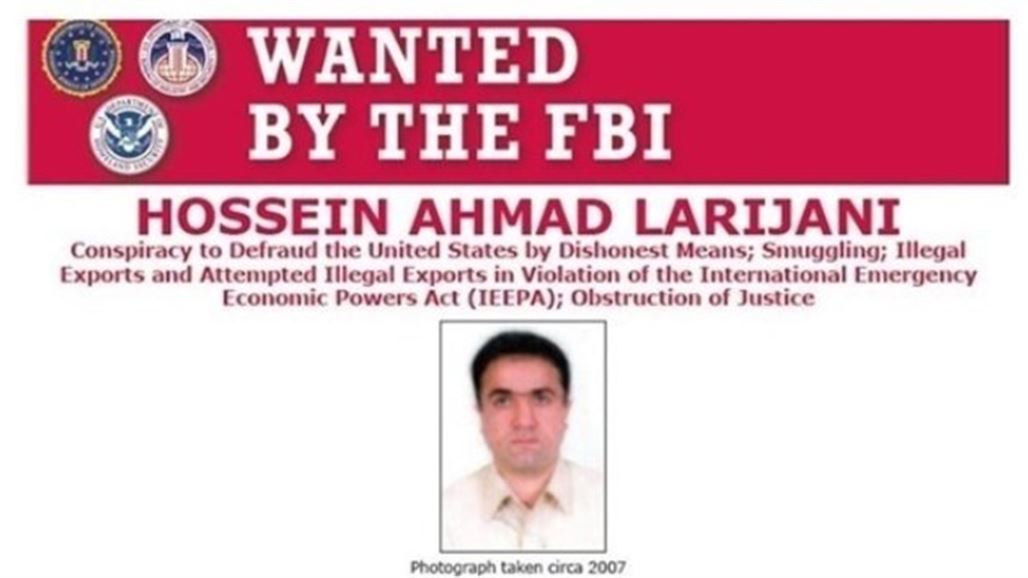 ) - The Federal Bureau of Investigation (FBI) has awarded a $ 3 million reward for reporting information leading to the arrest and conviction of an Iranian man named Hussain Ahmed Larijani, 55.

The FBI said in a statement posted on the official website that Larijani was wanted for his role in buying technology manufactured by a company in the US state of Minnesota, illegally incorporated later in the explosive devices targeted US and coalition forces in Iraq from 2008 to 2010.

US authorities believe the wanted man is in Tehran.

A federal order in the District Court of the District of Columbia in Washington, DC, issued on September 15, 2010, the arrest of Hussein Ahmed Larijani on charges of conspiracy, fraud, smuggling, illegal export and attempting to do so in violation of the International Emergency Law (IEEPA).

According to the indictment, Larijani and during 2007-2008 plotted to buy six illegal transmission units with the help of one company in Iran, three companies and four that they described as "conspirators" in Singapore .

The FBI said a Singapore company known as Corrigent International had tricked Minnesota into shipping the units to Singapore by claiming that they would be used in a domestic communications project, adding that once the units arrived in Singapore they were illegally transferred to Iran.

The FBI confirmed that three of the four were arrested in Singapore and handed over to the United States, saying they had pleaded guilty, spent a period in federal custody, then were deported to their country, while the fourth was still at large.

» Deputy: Law of graft in the event of its approval will contribute to the prosecution of corrupt
» A suicide attack in the Netherlands was foiled and seven terrorists, one of Iraqi origin, were arres
» Iraqi Defense allocates a reward for information about the remains, "Kuwaitis and Iranians."
» Document ... Saudi Arabia reward Iraqi media to be passed shady deals
» FULL EVENT: Donald Trump Speaks at Retired American Warriors PAC Event 10/3/16