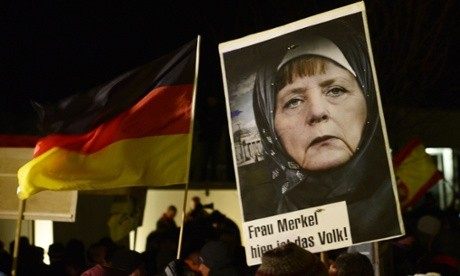 Prison Planet
That means halal meats aplenty, a hijab for every blond girl and the musical delights of Mohammed and the Mohammedans!
Check out this video from Kaulsdorf which was shared December 4th by Germany’s AfD party on Facebook.
“Previously the Christmas songs went differently,” they said
AfD wrote about the incident in German on their website (translated with Google):

Every year the Alt-Kaulsdorfer Christmas market takes place on Saturday of the second Advent weekend. A traditional Christmas market, especially for families with children, which has preserved its special family and traditional atmosphere in the 20th year.
” Power up the door, the gate makes far ” – we sing Advent and so opened the adjoining parishes, associations, artists and professionals, especially spirits producer Schilkin, their farms. In a wonderful winter weather there was lively activity on the village street at the numerous stands with culinary offers, self-made textiles, ceramics and jewelery. In the Protestant church, choirs and winds were invited to sing along, the court of the Johanniskirche and the psychosocial center was celebrated in a convincing manner, and in the old vaulted cellar of Schilkin not only “Berliner Luft” but also cribs,
A very different and very strange picture, on the other hand, on the stage lamp of Schilkin, which had been transformed into a stage. Here, a band presented sounds of near- or far-eastern sounds in unintelligible language and animated oriental dances. Many visitors were irritated to understandable displeasure about this inadequate appearance.
We celebrate the advent of the Lord. Christians are preparing for Jesus’ birth, for Christmas. ” Power up the door, the gate makes far ” – Anyone who has felt here invited or invited the tear goals for the whole world? Should this so unsuitable performance enrich our culture, or rather defile our Christian stronghold?
We hope next year to more sensitive hosts and organizers in the district office Marzahn-Hellersdorf. Here too, the AfD now has a responsibility to which it will place itself. Because conservative, bourgeois values like home, roots, tradition, family and children are important to us – yes, we keep them.
Make yourself a picture with this video recording under
https://www.facebook.com/afd.marzahn.hellersdorf/videos/928286723971543/ who on facebook resulted in a short time to almost 150,000 reproductions and over 800 highly applied comments like this :
Cornelia W. ” On such a Christmas market I will not go. Our beautiful Christmas time is spoiled. I find it without words. It is the beginning of Islamization . ”
Stefan S. ” Worse, because some Tangled even dance to. Nothing against foreign music, but for Christmas on the Christmas market? ”
Reinhold E. ” F ahr once in Turkey and build up a stage and play Christmas carols. This will probably not take five minutes to get Erdovahn’s Guard. In Germany, however, everything is permitted. “

How bigoted! Losing your cultural traditions is progress! Tolerance is a virtue and our diversity is our strength!
http://usdefensewatch.com/2016/12/its-christmas-time-in-the-islamic-republic-of-germany/

» Berlin, Germany: “I Am Muslim What Are You?” Muslims Beat Christians for Christmas Fun
» Christmas Traditions Around The World 2015: How They Celebrate In Germany, France, Mexico And Other
» In Time for Christmas
» The President of the Republic and the First Lady attend the Christmas Mass
» Germany: Islamic terrorism is the biggest threat to the country

» The Saudi Council of Ministers praises the distinguished relations with Iraq

» Cabinet votes to install a new batch of contracts

» Al-Sudani enumerates the achievements of his government within 100 days and announces gas, health an

» Integrity: bringing in a deputy accused of receiving $750,000 in exchange for refraining from exerci

» Al-Sudani's advisor: Iraq has made great strides in combating the financing of terrorism and money l

» Nermeen Maarouf: The decisions of the Council of Ministers were quickly reflected in the movement of