From words to deeds: Tehran-Beijing-Moscow Axis changes everything

From words to deeds: Tehran-Beijing-Moscow Axis changes everything 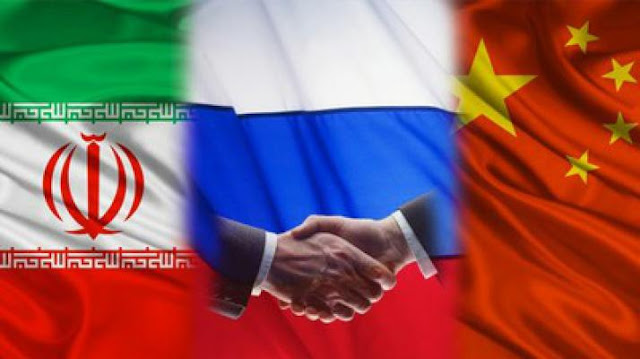 "Putin unites China and Iran into an anti-American coalition in the Middle East"
Over the span of just a few days, the situation in the Middle East in general and Syria in particular has undergone radical changes. What’s more, these are good changes which we can be proud of, ones which many in the Pentagon are losing sleep over. Putin is taking full advantage of the institutional paralysis which is engulfing the United States during election campaigns and is, literally in front of dumbfounded Americans’ eyes, redistributing spheres of influence in one of the key regions of the world.
Let’s start with the reports that Russia has just set up its own air force base in Iran. Honestly speaking, this isn’t the case. This is not our base. Iran has “loaned” it to us for some time in order for bombing ISIS terrorists and their friends in Syria to be easier. The context of these reports is key. In general, it is no secret to many that Iran has long since closely cooperated with Russia in Syria and opened its airspace for the passage of Russian Caliber rockets, just like its airfields were already being used last year by our transport and bombers for refueling.
But there is a nuance. Iran and Russia have tried not to advertise this, apparently so as to not create additional tension during the process of Syria negotiations, and so that Iran can still continue the tedious and difficult work of defrosting their Western assets since sanctions have been lifted. But the situation has radically changed now.
First of all, Russia has obtained the official right to use the airfield for basing Russian bombers, including strategic ones capable of carrying nuclear weapons. The last time that Iran decided to allow foreign troops onto its territory was 70 years ago. This is a sign of great trust and the very high level of relations between our countries. This move fits well into the general context of Russian-Iranian relations. This benefits the - let’s call things by their names - future competition to the Suez Canal, the “North-South” transport corridor, which needed a military “roof” and has now got it.
Secondly, the presence of Russian aircraft on Iranian territory is now known to the whole world, and this changes the configuration of what is happening in the Middle East to a certain extent. Another Russian base in the region, a base which moreover could host bombers with nuclear weapons, causes great strain not so much for the US as for our Saudi and Qatari partners who will now feel very uncomfortable.
In fact, this is being done very publicly for the first time. Tehran and Moscow are sending a clear signal to our American partners in the region, and the State Department has already spoken out against these actions, advising that the redeployment of Russian bombers was “carried out too quickly” and, most importantly, without consulting the Americans. The Americans have been offended, but while they are busy with elections, Putin is stitching together a new anti-American alliance, among which even such countries with difficult relations with each other, like Iran and Turkey, have a place.
And now the second important element of the puzzle. For the first time during the Syrian crisis, Beijing has moved from diplomatically supporting Moscow and Damascus to military supporting them. These are still just the first steps, and it is not worth expecting the People’s Liberation Army of China to land in Aleppo tomorrow, but this gesture by the Chinese has meaning. A representative of the Central Military Commission of the People’s Republic of China, Guan Ufa, flew to Damascus this weekend and promised Assad humanitarian assistance from China as well as assistance in “strengthening personnel training.”
Syrian authorities and the Syrian Army really benefit from this. We should also consider that the Chinese prefer to intervene in international conflicts only when they have no other choice and know exactly who will win. It is obvious that Beijing took the opportunity to avoid direct participation in the Syrian crisis for the sake of not creating another point of tension between them and the United States. Logic dictates that this means that Beijing is now confident that the anti-American coalition in the Middle East will win.
Now, based on such a forecast, they’ve decided to offer some assistance which they can turn into a certain influence in the region later. We aren’t bothered by this. We have no claims to global hegemony. Squeezing American influence out of the Middle East will be much easier with Beijing’s help.

Right now, thanks to the Kremlin’s diplomatic efforts, a coalition of countries who are ready to fight against American hegemony is forming not only in words, but in deeds. The Americans do not like this, but they will have to get used to it. Sooner or later, they, and not us, will find themselves in complete international isolation.
http://www.fort-russ.com/2016/08/from-words-to-deeds-tehran-beijing.html

» Al-Kazemi tweets from Basra: With deeds, not words, we are moving together towards a better future t
» Deputy criticizing the work of electricity: It has become a ministry of words, not deeds
»  Moscow and Beijing hold training to stop missile attacks from "third countries"
» Moscow and Beijing join forces to bypass US dollar in world money market
» US report: Washington, Moscow and Beijing are competing for the gas field Mansourieh