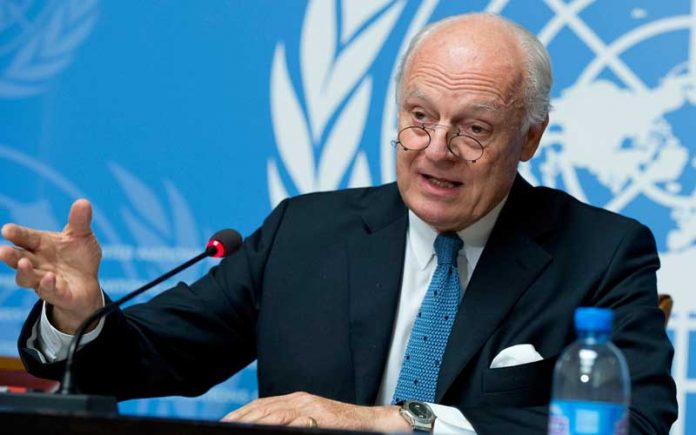 Information / Baghdad ..
The UN envoy to Syria, Stephane Demistora, announced Saturday that he informed UN Secretary-General Antonio Guterres of the results of the consultations in Vienna between the Syrian parties and the delegations and that the decision to participate would be by Guterres.
This came at a press conference held by de Mistura, at the conclusion of the Vienna round of Syrian negotiations, which was held in the Austrian capital, due to logistical reasons.
Demistora said that "consultations were held in a special ninth session with the government delegations and the negotiating body, within the framework of the political process for Syria, and on the basis of advocacy, focused on the constitutional basket of the agenda of the talks."
He pointed out that this "to implement UN resolution 2254, taking into account the standards and observations, and that he consulted the delegations of a number of States, and the Secretary-General held similar consultations, and stated that the goal is the full implementation of the UN resolution."
"Everyone reiterated their commitment to respect his mandate, committed themselves to the ongoing political process in Geneva and stated that the only sustainable solution through a Syrian-led, inclusive political process meets the legitimate aspirations of the Syrian people," de Mistura said. Ending / 25
http://www.almaalomah.com/2018/01/27/276785/

» Report: Iraq is among the top 10 countries in the world in oil pipeline capacity

» Analysis: More than half of all Bitcoin trades are fake

» Saleh: Iraq looks forward to the support of the international community in the field of strengthenin

» An alliance to support the Sudanese and form a new government.. The framework sets the date for its

» Muhammad Al-Halbousi.. What after announcing his resignation from the presidency of the Iraqi parlia

» What is the fate of the deposed presidents' frozen funds in the West?

» An American report: Fears of new clashes between the parties to the Iraqi crisis

» Advanced completion rates for a vital project in Anbar

» Oil official: We are close to achieving a surplus in gasoline and exporting it abroad

» In the absence of the presidency of the parliament .. Is it possible to elect the President of the R

» Al-Sudani: I will attend the parliament session tomorrow and will not vote on Al-Halbousi's resignat

» Al-Araji: International pressure must be maintained to prevent the return of ISIS

» Central Bank Governor: Our initiatives contributed to providing many job opportunities for different

» Al-Shatti: Iraq lives in a turbulent regional environment, and an integrated security system must be

» An independent deputy comments on today's session: Its problems are great... We will not be a party

» Al-Kazemi's advisor: The housing policy is geared to provide low-cost housing for citizens

» The Ministry of Planning: a vision to absorb graduates in partnership with the private sector

» Head of the National Security Apparatus: There is cooperation with the security services in the Kurd

» Oil prices are falling back in global markets

» Global gold prices are back down