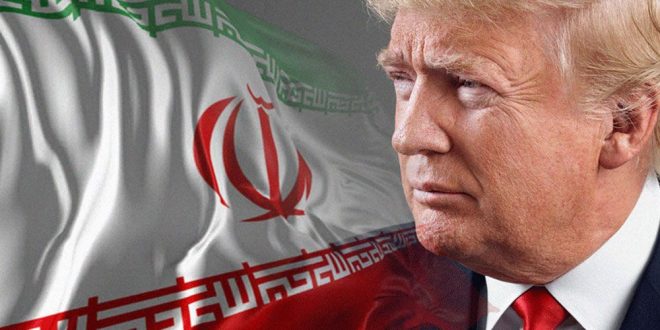 The second package of US sanctions entered into force on Monday.
US Secretary of State Mike Pompeo and Treasury Secretary Stephen Manuchein are due to unveil further details on the sanctions.
Pompeo, who stressed that his country is determined to change Iran's behavior.
He stressed  that the sanctions targeted the Iranian regime and not the people, noting that the policy of Trump, "the maximum pressure on Iran will be implemented in full."
For his part, the Iranian guide, Ali Khamenei, the American position, an attempt by Washington to describe the re-hegemony that was on his country, while promising to Commander of the Revolutionary Guard, Mohammad Ali Jafari, to defeat the economic war led by Washington against his country through the resistance, "Do not threaten Iran."
http://www.aljournal.com/%e2%80%8f%D8%A7%D9%84%D8%AD%D8%B2%D9%85%D8%A9-%D8%A7%D9%84%D8%AB%D8%A7%D9%86%D9%8A%D8%A9-%D9%85%D9%86-%D8%A7%D9%84%D8%B9%D9%82%D9%88%D8%A8%D8%A7%D8%AA-%D8%A7%D9%84%D8%A3%D9%85%D9%8A%D8%B1%D9%83%D9%8A/
rocky

second package of US sanctions against Iran comes into force


The second package of US sanctions on Iran entered into force Monday, this time involving the oil and banking sectors.
The US decision is to prevent all foreign countries, entities or companies from entering the US market if they decide to proceed with the purchase of Iranian oil or continue to deal with Iranian banks.
Oil
The administration of President Donald Trump confirms that it aims to inform Iranian oil exports "as close as possible to zero."
But Washington has announced that eight countries will benefit from temporary exemptions on oil purchases from Iran, which will be announced later on Monday.
According to US Secretary of State Mike Pompeo, this exception was decided because these countries "have shown great efforts to stop their oil imports as much as possible and because they have cooperated on many other fronts" with the United States.
Financial transactions
As of Monday, no foreign institution dealing with the Central Bank of Iran or other banks in the country will be able to access the US financial system.
The United States aims to cut off Iranian financial institutions from SWIFT's international remittances system, with the exception of "humanitarian transfers".
Washington imposed a first package of sanctions on Iran last August, against the background of the withdrawal of the United States in May of the nuclear agreement with Tehran in 2015.
The sanctions included disruption of financial transactions, imports of raw materials, as well as punitive measures in the fields of automobile industry and civil aviation.
It also included a ban on the Iranian government's purchase of the US dollar, as well as the prevention of investment in Iranian treasury bonds, the ban on trade in gold or other precious metals, aluminum, steel, carbon or graphite.
It also included a ban on trade in the automotive and commercial aviation sectors and a ban on US imports of Iranian carpets and foodstuffs.

Trump: sanctions on Iran the most stringent .. And Rouhani responds

[size=32]
Trump: sanctions on Iran the most stringent .. And Rouhani responds[/size]


US President Donald Trump said economic sanctions in his country's second package to Iran, which came into force on Monday, were the toughest.
"Iran is better off than abandoning its hostile approach and facing an economic disaster," he said.
Iranian President Hassan Rowhani said the sanctions were aimed at a regime rather than a people.
Rowhani also said in a televised speech that the sanctions would affect energy sectors and banks
"We seek to reduce the impact of US sanctions on the investment sector in Iran," he said, adding that "the investment market in Iran has a good ability to face sanctions."
"People need to trust the private sector," Rowhani said.

Re: The second package of US sanctions on Iran comes into force

» RUSSIAN VIEW: They will use an unforgiving force against Iran
»  package of new US sanctions on Iran affect Turkey
» Washington imposes sanctions on Iran's central bank
» The Foreign Ministers Of Iraq And Iran Discuss A Package Of Issues And Agree On A Soon Meeting
» Iran calls for the establishment of the "Quds Force"