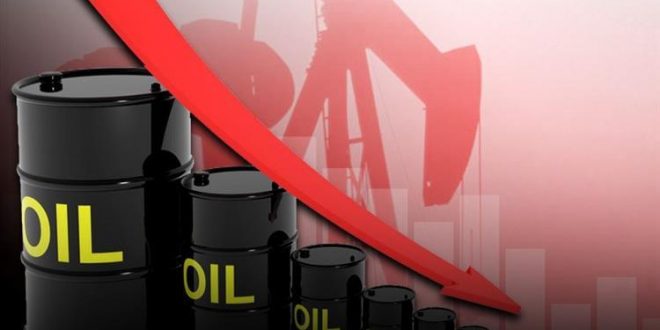 Oil prices have fallen on concerns of oversupply and the dollar's rise, but expectations that OPEC and Russia will agree to cut crude production next week will curb losses.
The benchmark crude, Brent crude from the North Sea and the US Light crude, posted the weakest monthly performance in more than a decade in November, falling by more than 20 percent as global supply exceeded demand.
Brent crude futures closed 80 cents lower, or 1.3 percent, to settle at $ 58.71 a barrel, while US crude fell 52 cents, or 1 percent, to $ 50.93 a barrel.
Energy Minister Alexander Novak met with his Saudi counterpart Khalid al-Faleh on the sidelines of the G20 summit in Argentina, the Energy Ministry said. Earlier, the RIA news agency said they would discuss a reduction in oil production in 2019.
Russia's oil output in 2019 is expected to remain at the same level this year, but it may be adjusted according to an agreement between OPEC and non-OPEC producers, Novak was quoted as saying.
A significant increase in oil production in the United States, Russia and some Opec members, dominated by producers in the Middle East, has helped fill global stocks and oversupply in some markets.
The US Energy Information Administration said in a monthly report that the average US crude production rose about 129 thousand barrels per day in September to a new record of about 11.5 million barrels per day.
http://www.aljournal.com/%D8%A7%D8%B3%D8%AA%D9%85%D8%B1%D8%A7%D8%B1-%D8%AA%D8%B1%D8%A7%D8%AC%D8%B9-%D8%A7%D8%B3%D8%B9%D8%A7%D8%B1-%D8%A7%D9%84%D9%86%D9%81%D8%B7-%D8%A8%D8%B3%D8%A8%D8%A8-%D8%AA%D8%AE%D9%85%D8%A9-%D8%A7%D9%84/