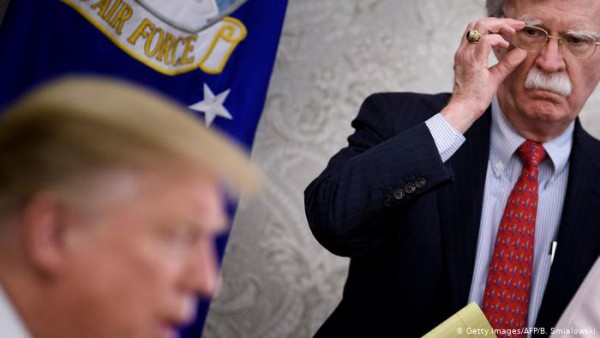 WASHINGTON - (AFP) - The White House announced that it is not permitted for former US National Security Adviser John Bolton to publish a book he has prepared, as it currently contains classified information, according to a letter sent to Bolton's attorney and seen by AFP. Wednesday.
After reviewing the draft book - a measure that applies to all books published by former employees of the White House - the US National Security Council said that the draft contained "secret information", some of which are classified as "highly classified" and "could cause exceptional harm to national security". ” "The draft cannot be published without removing this confidential information," he added.
Bolton's lawyer, Chuck Cooper, refuted the White House's allegations. He said in his response Wednesday, "We do not believe that any of this information can reasonably be considered confidential."
In his letter, Lawyer Cooper asked the National Security Council to conclude his review of the book quickly, in light of the possibility of summoning Bolton to testify as part of the Trump trial.
"If (Bolton) is summoned to testify, it appears certain that he will be asked questions that will address most of the information" on the Ukraine issue, the lawyer wrote.
Bolton in his book particularly reveals a conversation that could harm Trump, who is currently facing a trial for his removal in the Senate on charges of abuse of power and obstruction of Congress.
According to Bolton, Trump told him in August 2019 that he did not want to release military aid to Ukraine as long as the Kiev authorities did not investigate former Democratic Vice President Joe Biden, who was seen as the favorite to compete in the November 3, 2020 presidential elections.
Democrats accuse Trump of using state means to try to strike the credibility of a potential competitor, in violation of the constitution.
However, the presidency believes that Trump's decisions fall within the framework of fighting corruption in Ukraine.
Trump strongly criticized Wednesday Bolton who sacked him in September, and considered in a tweet that his former national security adviser “was fired because if I listened to his advice, we would be fighting the sixth world war.” "He passed away, and immediately he wrote a false and all evil book."

» Meet the top candidates to succeed Bolton at the White House
» Bolton: White House Invited Putin To Visit Washington
» Bolton accuses the White House of denying him access to his Twitter account
» White House lawyer moved transcript of Trump call to classified server after Ukraine adviser raised
» White House prevents the "CNN" and other institutions to attend the press conference