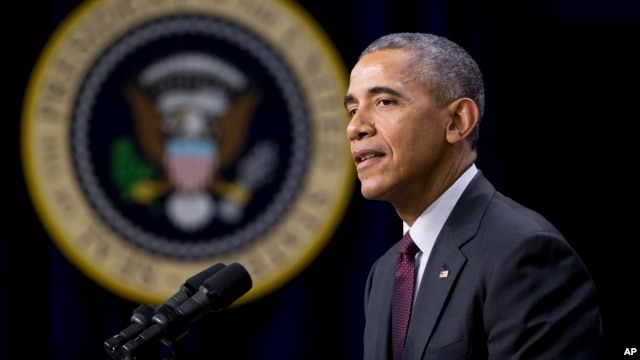 
President Barack Obama met with his defense chief at the White House on Friday as the White House ramps up its strategy to defeat Islamic State and the group’s attempts to expand beyond Iraq and Syria into Libya.

The president met with Secretary of Defense Ash Carter after directing his security team to “intensify those elements of our strategy that are showing progress,” said spokesman Josh Earnest.  That includes the use of U.S. special expeditionary forces to carry out raids, free hostages, capture IS leaders and gather intelligence.

“We need to accelerate the defeat of ISIL [Islamic State],” said Carter during an interview with National Public Radio (NPR) on Friday.  The Pentagon has said IS fighters have moved into Libya to train and recruit fighters and warned they may be plotting to capture large swaths of territory, as they did in Syria and Iraq.

The U.S. has sent some of its forces into Libya to assess what is happening on the ground and is open to sending more personnel.

During the NPR interview, Carter said Obama is willing to consider proposals to do more to combat Islamic State.

“He has granted every proposal we’ve asked him,” said Carter.  “And do I expect more in the future? Yes. We’re looking for opportunities to do more.”

Earnest said the White House had no announcement to make on Friday regarding the possible deployment of additional expeditionary forces into Iraq, Syria or Libya.

However, he added, the White House is “mindful” of the Islamic State strategy to establish a foothold in areas where there is chaos, such as in Libya.  There is much “turmoil and violence,” and Libya is “struggling to put together a central government,” said the White House spokesman.

The U.S. supports a U.N.-backed plan to build a united Libyan government.  But power struggles and regional rivalries are threatening the effort.
http://www.voanews.com/content/obama-ramps-up-what-works-in-fight-against-islamic-state/3168897.html

» Obama says Islamic State likely to continue to threaten U.S.
» Obama: long strategy to fight Daash including the formation of an Iraqi government comprehensive
» Trump Back to Scolding Megyn Kelly, This Time Over His Strategy to Defeat Islamic State: ‘Get Your F
» Official says troops not enough to fight Islamic State in Anbar
»  Trump settles on a new ally to fight against the Islamic State