The European Union may have to deal with unforeseen consequences if it allows Turks visa free travel, including influx of Kurdish refugees, a Greek member of the European Parliament told Sputnik on Tuesday. 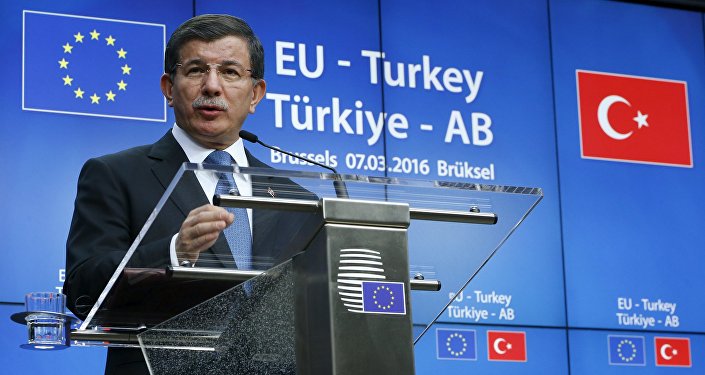 © REUTERS/ Yves Herman
Critics Slam 'Quick Fix' EU-Turkey Deal Amid Practical and Legal Concerns
MOSCOW (Sputnik) – On Monday, the Turkey-EU summit on migration took place in Brussels. Turkey pledged to take back all undocumented migrants that had arrived to the European Union and send in their place legal Syrian refugees to the bloc on one-for-one basis in exchange for the acceleration of visa liberalization negotiations and EU accession talks.
"I don't know if things can move forward so fast but I fear that visa-free travel could have unforeseen consequences if the semi-authoritarian [President Recep Tayyip] Erdogan regime would escalate its war against the Kurdish minority inside Turkey. In this case, we could see massive flows of Kurdish refugees from South-Eastern Turkey being added to the flows of Syrian refugees," Kostas Chrysogonos said.
Brussels and Ankara drafted the EU-Turkey action plan in November 2015, under which EU member states pledged to pay Turkey 3 billion euros over the next two years and fast-track Ankara’s EU accession talks in exchange for efforts to limit migrant arrivals. A final agreement between the EU and Turkey is expected by the next summit on March 17-18.
The Kurds represent the largest ethnic minority in Turkey. Ankara is conducting a special operation to suppress the Kurdistan Workers’ Party (PKK) in the country, which has been fighting for independence of Kurdish territories from Ankara since 1984. The group, which Turkey considers a terrorist organization, seeks to create a Kurdish state in parts of Turkey and Iraq.