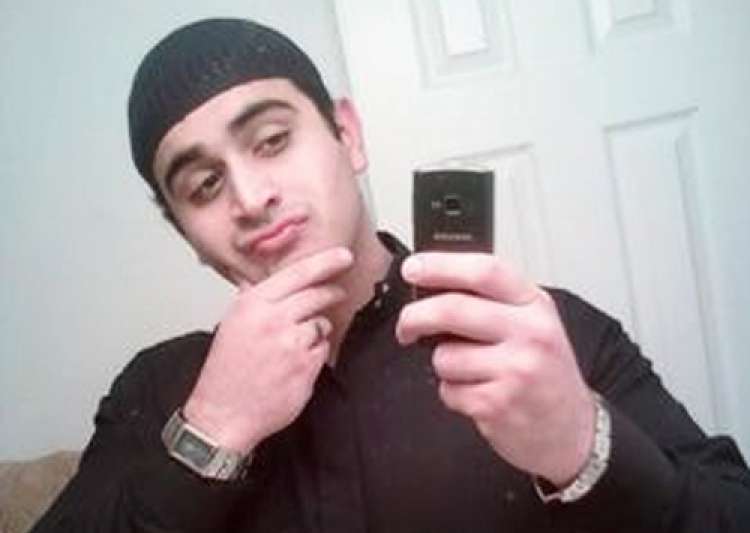 Omar Mateen, the alleged ISIS loyalist who massacred 49 people and left another 53 severely injured at a  club in Orlando was himself a regular at the gay nightspot and used gay dating apps.

Regular clubgoers told local media and MSNBC that Mateen had been using multiple gay apps, including Grindr, with mutual acquaintances to "hook up."
At least four regular customers of Pulse, the lesbian, gay, bisexual and transgender nightclub where the massacre took place, told the Orlando Sentinel on Monday that they believed they had seen Mateen there before.
Another clubgoer, Kevin West, told the Los Angeles Times that Mateen messaged him on and off for a year using a gay chat app.
"Sometimes he would go over in the corner and sit and drink by himself, and other times he would get so drunk he was loud and belligerent," Ty Smith told the Orlando Sentinel yesterday, referring to slain shooter Omar Mateen, 29.
Smith told the paper that he saw Mateen inside at least a dozen times.

"We didn't really talk to him a lot, but I remember him saying things about his dad at times," Smith said. "He told us he had a wife and child.
The latest development has put a question mark over reports that it was Mateen's hate for homosexuals that led to the tragedy.
However, Mateen's father Seddique Mir Mateen had claimed his son got angry when he saw two men kissing in Miami a couple of months ago and thought that might be related to the shooting.
Mateen's father told NBC News that "this has nothing to do with religion" in spite of reports that his son had declared his allegiance to ISIS.
FBI chief James Comey said his bureau was "highly confident" Mateen had been "radicalised" while consuming online propaganda and that he had claimed allegiance to Islamic State leader Abu Bakr al-Baghdadi in a series of calls during the attack.
The massacre reverberated on the presidential campaign trail, where Republican Donald Trump and Democrat Hillary Clinton, the two likely opponents in the November 8 election, clashed over how to confront violent Islamist extremists.

read:http://www.indiatvnews.com/news/world-was-orlando-shooter-omar-mateen-a-gay-himself-334353?utm_source=ARP0
_________________
For I know the thoughts that I think toward you, saith the LORD, thoughts of peace, and not of evil, to give you an expected end. Then shall ye call upon me, and ye shall go and pray unto me, and I will hearken unto you. And ye shall seek me, and find me, when ye shall search for me with all your heart.

» Orlando shooter a 'lone wolf'? Not so fast!
» FBI Arrests Widow Of Orlando Nightclub Shooter
» Trump Blasts Obama for Speech on Orlando Attack: He ‘Was More Angry at Me Than He Was at the Shooter
» Man overheard shooter’s phone conversation; shooter said there were 4 others involved, ‘3 snipers an
» Trump on what happened in Orlando

» Because of import.. Salah El-Din was promoted, complaining of stagnation and low prices

» In pictures.. Barham Salih receives the credentials of the Iranian ambassador and the ambassadors of

» Rule of Law: The issue of dissolving Parliament is an escape from the problem

» A judge responds to federalism.. the political forces have exceeded the constitutional terms, and Al

» After al-Sadr's speech, the factions talk about "blind sedition" and "severe consequences from which

» Kurdistan refuses to hand over oil and gas to Baghdad

» Waiting for the industrial cities, Ur city and Nasiriyah airport.. 100,000 graduates are waiting for

» Observers: Al-Sadr closed all doors with the coordination framework.. and there are no signs of reso

» A “fiery” speech by Al-Sadr and a statement by “The Frame” .. The secrets of the sharp debate in Ira

» A 'detailed' statement from the framework after al-Sadr's speech

» The political scene.. Deputy: The blockage is still there and the situation is the same

» Saleh: We support international and regional cooperation to confront the challenges of terrorism, th

» Choosing the heads of the age for three parliamentary committees

» Al-Amiri: The forces that created the mass graves regime are maliciously seeking to revive its bruta

» The coordination framework issues a statement on the latest developments

» President of the Republic: We support international and regional cooperation to confront the challen

» The political blockage hinders the formation of the government

» In the document.. the General Secretariat responds to the Ministry of Health regarding the exemption

» Minister of Commerce: The Federal Court's decision put us in front of a new responsibility

» Electricity: Failure to pass the emergency subsidy law will put us at risk of cutting off gas suppli

» After the decision of the Federal Court .. What are the laws that the House of Representatives has t

» Al-Kazemi’s advisor: The Federal Court’s decision cut off the road to the government’s demand to sub

» Al-Kazemi’s advisor: A third of the electricity production will recede, and the ration will be avail

» After stopping for more than 12 years, the industry announces the start of the trial operation of th