Dozens of bodies wash up on Libyan beach

Dozens of bodies wash up on Libyan beach

Dozens of bodies wash up on Libyan beach
At least 74 migrants drowned in recent days off the coast of Libya, the Red Crescent has said. A sharp spike in migrant deaths in the Mediterranean showed no sign of abating despite EU efforts to stem the flow of people. 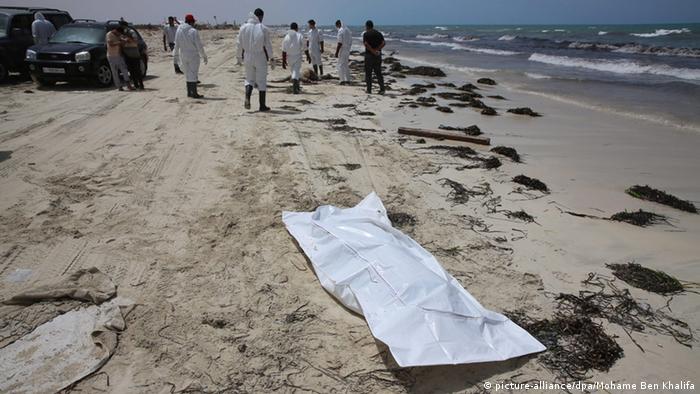 The bodies of some 74 African migrants have washed up on a beach in the western city of Zawiya, the Libyan Red Crescent said on Tuesday. Authorities said they expected the death toll to rise, as a rubber boat found nearby was capable of carrying about 120 people.
The dead were found on Monday morning and were brought to a Tripoli cemetery for burial, Red Crescent spokesman Mohammed al-Misrati told the Associated Press.

According to the European Border and Coast Guard Agency, migrant deaths in the Mediterranean have reached record heights in recent months, and the trend did not seem to be abating despite the winter cold. The Libya-Italy human trafficking route claimed at least 4,579 lives last year, and the true number is thought to be much higher. This is a massive increase compared to 2,869 in 2015.
January 2017 saw 288 migrants perish en route to Europe, the highest monthly toll seen since the 2011 uprising that drove Libya into chaos and turned the country into a death trap for the many sub-Saharan Africans seeking to escape conflict, famine or poverty. European attempts to intercept the boats have had no effect on the number of casualties, and the latest plan from the European Union would see boats turned back to Africa and the would-be migrants accommodated in camps in places considered "safe" like Tunisia or certain parts of Libya.
After years of civil war that ousted former strongman Moammar Gadhafi, Libya continues to be ruled by one UN-backed and one rival government that are locked in a protracted conflict, as well as several militias. The pandemonium has created an ideal situation for human traffickers profiting off misery, and many who have survived the journey to Europe have described atrocities like rape, torture and forced labor happening to migrants inside Libya.
http://world.einnews.com/article/367554001/vVsz5RBPf9D6x4uR?lcf=ZX9dkeSQfK-5FADPuwjBkQ%3D%3D