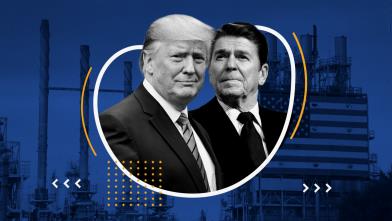 Follow-up - Mawazine News
Bloomberg News said that US President Donald Trump was wrong when he stated last week that his country does not need Middle Eastern oil.
The US agency added that the United States is still importing crude oil produced by Iraq and Saudi Arabia, noting that any obstruction of oil supplies from the Middle East will raise its selling prices to consumers in the United States.
According to the agency, the US oil refineries still need the Middle East oil to process it and manufacture products that its customers demand.
Trump had made that statement from inside the White House after Iran launched a barrage of missiles at two military bases in Iraq that the US military is exploiting, amid fears of an escalation in attacks on major oil facilities in the region, which may affect the flow of oil through the Strait of Hormuz, a waterway Narrow linking the Gulf to the high seas.
"It is true that small quantities of crude produced in the Arab Gulf region are currently finding their way to oil refineries in the United States," Bloomberg says, noting that tanker tracking data showed that oil supplies that reached US refineries through the Strait of Hormuz in 2019 were less than 5% of the total 16.5 million barrels per day of crude and condensate.
Meanwhile, four Asian countries (China, India, Japan and South Korea) imported two-thirds of the crude transported through the Strait of Hormuz in the same year.
America is a big buyer
The United States is the fifth largest buyer of Middle East oil, and although its imports from that region declined with the increase in oil production rates locally due to the booms that occurred in extracting shale oil, the share of the Gulf states in the oil imported by the United States in 2019 reached a barrel Of every eight barrels produced by these countries, an average of 875 thousand barrels per day.
And with the outbreak of tension with Iran, the obvious fact is that there are few sources from which heavy and sour oil (which contains high concentrations of sulfur) is imported, and on which the refineries of the American Gulf Coast depend.
Bloomberg recalls that the United States imposed sanctions on Venezuela's oil exports in January 2019, while Mexico and Colombia face a drop in production due to a lack of new investment.
Meanwhile, Canada is now the largest oil supplier to the United States, while the Middle East is providing the majority of the remaining quantities.
Another reason
. The other reason for America’s dependence on oil flows from the Persian Gulf lies, according to the agency, its prices.
Bloomberg believes that the killing of the Iranian Quds Force commander, General Qassem Soleimani, in a raid by a US plane on the 3rd of this month. United.
If the mere possibility of blocking oil flows from the Arab Gulf may raise fuel prices in America, then you can imagine what a real disruption in supplies will cause, so what if it is cut off completely, according to the agency.
Bloomberg concludes its report that no American president wants to go into such an adventure in the presidential election year, and the current White House resident is no different from that of his predecessors. Ended 29 / p