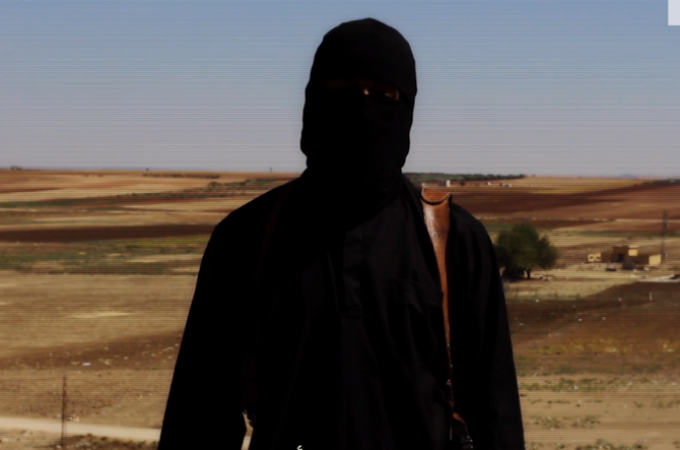 ISIL said they have executed a US aid worker as a warning to the United States
A video has been circulated online purporting to show members of the Islamic State of Iraq and the Levant (ISIL) group beheading several Syrian soldiers and a US aid worker.
The footage, released on Sunday, showed the beheading of at least 12 people whom ISIL said were pilots and officers in Syrian President Bashar al-Assad's military.
The clip was circulated through credible social media accounts that have previously shared similar videos that were later verfied, Al Jazeera's Imran Khan, reporting from Baghdad, said.
But it is not yet possible to verify the authenticity of the footage, Khan said.
"To Obama, the dog of Rome, today we are slaughtering the soldiers of Bashar and tomorrow we are slaughtering your soldiers. And with god's permission we will break this final and last crusade," a masked man said before he was shown beheading one of the men.
The video also showed a bloodied head on the ground, whom ISIL said was that of US aid worker Peter Kassing.
"This is Peter Edward Kassig, a US citizen of your country. Peter, who fought against Muslims in Iraq, was serving as a soldier in the American army, does not have much to say," a masked person standing near the head said.
"His previous cellmates have already spoken on his behalf."
Khan said: "Peter had converted to Islam. He is a Muslim who died in the hands of Muslims. So it is a pretty controversial statement coming from ISIL."
Kassig, a 26-year-old from the US state of Indiana, converted to Islam and changed his name to Abdul-Rahman Kassig.
'Brutal muder'
The White House said the US intelligence community was working to determine the authenticity of the video.
If the video is authentic, the White House would be "appalled by the brutal murder of an innocent American," National Security Council spokeswoman, Bernadette Meehan, said.


Kimberly Halkett, reporting from Washington, said: "Peter's family has released a statement, saying that they are in contact with the US government to understand if the video is authentic or not. They asked the international news media not to broadcast or publish any material provided by the hostage takers."
British Prime Minister David Cameron said he was "horrified" over the video.
"I'm horrified by the cold-blooded murder of Abdul-Rahman Kassig," Cameron wrote on Twitter on Sunday.
"ISIL have again shown their depravity. My thoughts are with his family."
Two US journalists and two British aid workers had already been beheaded by ISIL in what the group says are retaliatory killings for the US-led air campaign against its fighters in Iraq and Syria.
Later on Sunday, the Syrian Observatory for Human Rights, said, in Syria's al-Raqqa city, ISIL executed al least 13 men, who were arrested earlier this month after they were charged of collaborating with the Syrian regime.
The London-based rights group said, according to local sources, the Syrian nationals were arrested about a month ago, adding that ISIL found individual weapons and wireless devices in their possession.
ISIL has executed numerous Iraqis and Syrians. In October, the group  publicly executed Iraqi news cameraman  Raad al-Azzawi and three civilians in northern Iraq, according to the journalist's relatives.

Re: ISIL 'beheads Syria troops and US aid worker'

Peter Kassig may have defied captors over beheading video statement


Peter Kassig may have defied his Islamic State captors and refused to make a propaganda statement before he was murdered according to a counter terrorism and hostage negotiation expert.
A horrific video from Islamic State of Iraq and the Levant (Isil) purporting to show the execution of the 26-year-old US soldier turned aid worker differs from previous films because the victim does not make a statement to camera.
A masked fighter who is apparently the militant known as Jihadi John from earlier films instead pointedly refers to Mr Kassig’s silence and says hostages beheaded previously have spoken for him.
In the video released on Sunday morning, the militant, who speaks with a London accent, appears in black robes with a decapitated head at his feet .
He says: “This is Peter Edward Kassig, a US citizen of your country who repeatedly fought against the Muslims of Iraq while serving as a soldier under the American army, doesn’t have much to say. His previous cellmates have already spoken on his behalf. “

David Haines and Alan Henning – both from Britain – and Americans James Foley and Steven Sotloff each made statements before their deaths in earlier videos. Each held Barack Obama or David Cameron to blame for their deaths, because of American and British military action against Isil in Iraq and Syria.
Mr Kassig, from Indianapolis, Indiana, had served in the US Army's 75th Ranger Regiment, a special operations unit, and deployed to Iraq in 2007. He dedicated himself to charity work after he left the army.
Will Geddes, a security expert who has worked on several hostage ransom cases, said the earlier hostages are likely to have been subjected to a number of mock videos and told they would be spared if they cooperated.
He said the lack of message from Mr Kassig, could have meant he refused to cooperate. Mr Kassig, who had converted to Islam and adopted the name Abdul Rahman, could have also realised he was to be killed whether he helped or not.
Mr Geddes said: “This young guy was a former ranger, he had operated as a combatant in Iraq. He may have got wind through one of his jailers or other prisoner that they were pulling out British and European hostages.
“He could have said there’s no way I am going to propagate any of your message through a televised address.”
The video is also the first that ends without the appearance of another hostage threatened with beheading.
Prof Peter Neumann of King’s College Centre for Study of Radicalisation and Political Violence said the lack of a waiting hostage could mean the group no longer had any suitable captives.
John Cantlie, another British journalist held hostage, has appeared in a series of propaganda films reporting on the Islamic State on his captors' behalf.
Prof Neumann said: “I don’t’ think they have decided yet what to do with Cantlie, he must be still quite useful for them.”

Yesterday at 8:11 am by chouchou

Yesterday at 8:10 am by chouchou

Yesterday at 8:09 am by chouchou

Yesterday at 8:08 am by chouchou

Yesterday at 8:07 am by chouchou

Yesterday at 4:58 am by chouchou

Yesterday at 4:57 am by chouchou

Yesterday at 4:55 am by chouchou

Yesterday at 4:54 am by chouchou

Yesterday at 4:53 am by chouchou

Yesterday at 4:52 am by chouchou

Yesterday at 4:49 am by chouchou

Yesterday at 4:48 am by chouchou

Yesterday at 4:46 am by chouchou

Yesterday at 4:42 am by chouchou