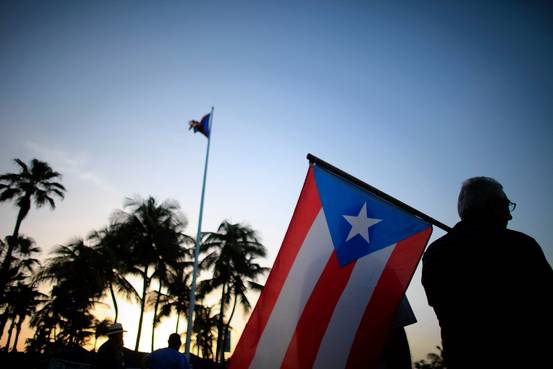 RICARDO ARDUENGO/ASSOCIATED PRESS
Greece isn’t the only country warning that it can’t pay its creditors. The government of the U.S. commonwealth of Puerto Rico said Monday that it won’t be able to repay debts it has piled up over the past decade.
Here’s a quick tour of what’s happening there.
How did Puerto Rico end up like this?
Puerto Rico’s problems date to the end of the Cold War, when the U.S. began closing military bases on the island, whose residents have American citizenship but don’t pay federal tax on their local income.
The expiration of corporate tax breaks in 2006 prompted an exodus of businesses, throwing the island into a recession. Puerto Rico had a severe housing bust, and the 2007-09 recessions in the U.S., the island’s biggest trading partner, hit the commonwealth hard.
What did Puerto Rico do in response?
The government borrowed heavily to balance its budget and has run deficits, which are prohibited for most states, for the past decade. It has around $72 billion in debt outstanding, up from $24 billion in 2000.
How is the economy doing now?
Not well. Puerto Rico’s economy has been in recession for nine years. The island’s economic problems are well documented in [url=http://recend.apextech.netdna-cdn.com/docs/editor/Informe Krueger.pdf]a report Puerto Rico’s government released Monday[/url] by Anne Krueger, a former top official at the International Monetary Fund and a report last year by the Federal Reserve Bank of New York. Among the highlights:

The Krueger report concludes that high labor and infrastructure costs have discouraged investment in labor intensive sectors such as tourism. The number of hotel beds on the island is the same as the 1970s, the report notes, and tourist arrivals are actually lower today than a decade ago. Meanwhile, the government has had to rely heavily on tax breaks to lure high-value, capital-intensive industries such as pharmaceutical- and medical-device makers.
In a symbolic irony, budget discussions in the island’s Senate last week were delayed when the electric system malfunctioned and then interrupted when pieces of the decorative ceiling in the chamber began to fall.
If Puerto Rico has so many problems, why did creditors lend to Puerto Rico so generously?
Congress facilitated Puerto Rico’s borrowing spree by granting the commonwealth the power to issue bonds that are exempt from federal, state and local taxes, unlike for debt of the 50 states. This made the island’s debt attractive to affluent investors in states with higher tax rates.
Detroit filed for bankruptcy protection in 2013. Is that where Puerto Rico is headed?
No, not unless Congress amends bankruptcy law. As a commonwealth, it lacks the tools available to U.S. municipalities to restructure their debt through Chapter 9 of the bankruptcy code.
A bill introduced in Congress last year would grant the island the ability to allow its public authorities to access Chapter 9 protections, but the bill hasn’t moved anywhere amid resistance from some creditors and conservative Republican lawmakers. The White House on Monday said it supported the effort to change the bankruptcy law.
Separately, a federal judge earlier this year voided a local law that would have cleared a path to restructuring for public authorities including the electric utility.
Neither of these fixes allow the government to restructure some $22 billion in general obligation debt, which the Puerto Rican constitution says must be paid. But it’s possible that by restructuring some of the debt issued by municipal authorities, Puerto Rico might be able to access debtor-in-possession financing, a form of credit for entities in financial distress.
What about a financial control board?
On Capitol Hill, at least one lawmaker has suggested creating a federal control board, which Congress used in the late 1990s to clean up finances for the District of Columbia. That option doesn’t sit well in Puerto Rico, where it conjures overtones of colonial rule.
Could this crisis spread to other parts of the bond market or financial system?
Puerto Rico’s bonds are largely held by U.S. mutual funds and hedge funds, not banks. Analysts say the crisis doesn’t appear likely to spill over to the rest of the $3.7 trillion municipal-bond market because the economic problems are specific to Puerto Rico. That could change, however, if bond guarantors that have insured Puerto Rico’s debt suffer losses that raise questions about their ability to pay claims on other insured debt.
Can the Treasury or Federal Reserve offer a lifeline?
The Obama administration says loan guarantees or other bailouts aren’t an option, and most observers believe that the Fed would be highly unlikely to provide support to Puerto Rico without approval from the Treasury.
A report from Arturo Estrella, a former Fed economist, last week said that the Federal Reserve has legal authority to extend lifelines to the island’s public authorities. But the Fed has probably determined that Puerto Rico “is not a systemic risk to the United States, and that’s what they’re really interested in,” said Sergio Marxuach, policy director at the Center for a New Economy in San Juan.
Treasury, for its part, may be reluctant to act because other states and cities have fiscal headaches of their own, and they will want to avoid setting uncomfortable precedents in Puerto Rico.
Where does that leave the island?
Without Chapter 9, any restructuring is likely to be a legal and political mess. Because the commonwealth’s general obligation debt is constitutionally privileged, some observers believe the government may try to claw back taxes and other revenues that back different bonds.
Moreover, because bonds have been issued both in Puerto Rico and in New York, any resulting litigation could play out in different jurisdictions. “That would be the worst possible scenario—litigating in multiple places,” Mr. Marxuach said.
With Chapter 9, the threat of restructuring would give the commonwealth greater leverage in negotiation with its creditors, said Richard Ravitch, the former New York lieutenant governor who steered New York City’s financial restructuring in the 1970s.
“Thank God we never had to file, but the fact that we had the power to is what got the banks and the unions to do things they swore they would never do,” he said.
So is Puerto Rico another Greece?
There are some clear similarities. Tax evasion is rampant in both countries. A report last year estimated that as many as 44% of certain sales tax revenues in Puerto Rico went uncollected.
Neither Greece nor Puerto Rico can devalue its currency. And both appear to have lost the confidence of bond investors after amassing debt, including large unfunded pension liabilities, that helped paper over deeper economic problems.
But the two are by no means identical. Greece’s debt burden is much bigger. Its economy has been in a much deeper slump and accounts for a greater share of the eurozone than Puerto Rico’s does relative to the U.S.
Unlike Greece, Puerto Rico doesn’t face a banking crisis because its banks have federally insured deposits and access to federally insured mortgages. Its debt is also largely held by private investors, increasingly hedge funds that were well aware of the island’s fiscal troubles, while Greece’s debt is held by the IMF and public creditors in Europe. 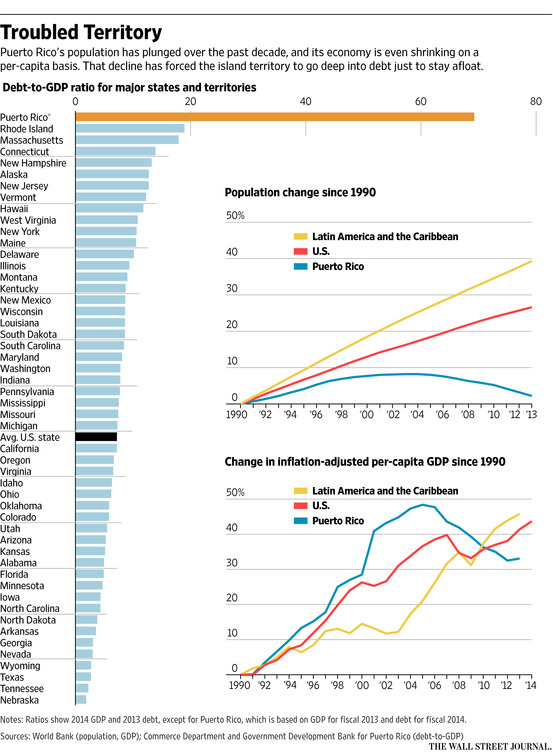 Yesterday at 8:10 am by Screwball

Yesterday at 8:06 am by Screwball