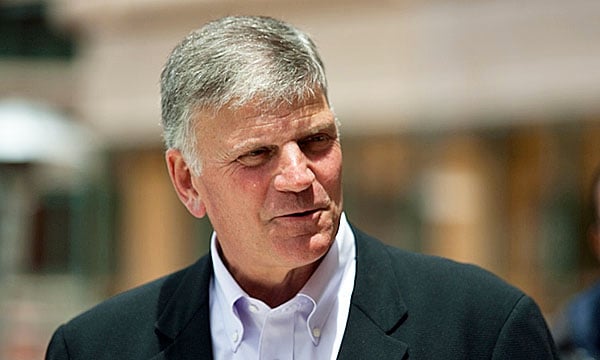 Franklin Graham
Franklin Graham, president of the Billy Graham Evangelistic Association and of the Christian international relief organization Samaritan’s Purse, struck back hard on Facebook at Target over its recently implemented transgender policy, saying allowing men to use women’s bathrooms puts the most vulnerable in society in danger.

“I agree with the American Family Association – this policy encourages sexual predators and puts women and children in danger,” Graham wrote. “A man shouldn’t be able to enter the women’s restroom or dressing room because he says he ‘feels like a woman today.’ That’s ridiculous.”
He went on, speaking of God’s design and the fruitlessness of humans to change that.
“The fact is, gender identity isn’t something we choose or feel,” Graham wrote. “We are the sex God created us to be – male or female. How a person feels doesn’t change the facts.”
Graham referenced statements made by Benjamin Watson with the Baltimore Ravens – in which the football star said “we are buying the lie that feelings trump all else and that how one feels can only be accepted and celebrated instead of addressed and challenged” – and agreed.
He also said Target’s new policy, in which males and females could decide for themselves which bathroom best corresponded to their genders, was harming business.
“Outlasting the Gay Revolution” spells out eight principles to help Americans with conservative moral values counter attacks on our freedoms of religion, speech and conscience by homosexual activists
“Target is putting its shareholders – and its customers – at risk! Just since last Wednesday, over 517,000 people have signed a pledge to boycott Target over its new bathroom policy that welcomes employees and guests to use the restrooms or fitting rooms that ‘corresponds with their gender identity,'” he wrote. “Target certainly has the prerogative to make this decision, but it’s proving to be bad for business. I’m glad people are standing up and letting them know this is wrong.”