Last Updated Apr 19, 2017 7:07 PM EDT
WASHINGTON -- CBS News has learned that a manhunt is underway for a traitor inside the Central Intelligence Agency.
The CIA and FBI are conducting a joint investigation into one of the worst security breaches in CIA history, which exposed thousands of top-secret documents that described CIA tools used to penetrate smartphones, smart televisions and computer systems.

Sources familiar with the investigation say it is looking for an insider -- either a CIA employee or contractor -- who had physical access to the material. The agency has not said publicly when the material was taken or how it was stolen.
Much of the material was classified and stored in a highly secure section of the intelligence agency, but sources say hundreds of people would have had access to the material. Investigators are going through those names.
The trove was published in March by the anti-secrecy organization WikiLeaks. 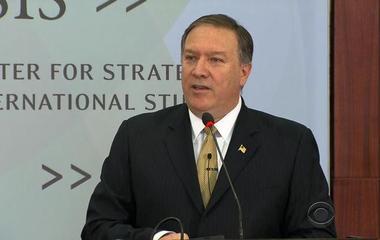 
In his first public comments as director of the CIA just last week, Mike Pompeo railed against WikiLeaks and its founder Julian Assange.
“It is time to call out WikiLeaks for what it really is: A non-state hostile intelligence service often abetted by state actors like Russia,” he said.
WikiLeaks has said it obtained the CIA information from former contractors who worked for U.S. intelligence. The CIA has not commented on the authenticity of the WikiLeaks disclosures or on the status of the investigation.
http://www.cbsnews.com/news/cia-fbi-on-manhunt-for-leaker-who-gave-top-secret-documents-to-wikileaks/

» After his failure to form the government ... al-Abadi's coalition caved in to step down Zarfi and as

» Khazali: Barham Salih wanted to hand Iraq over to America

» US official: We believe that Al-Kazemi will be great and Iran's threat to our forces remains great

» OPEC reveals details of the agreement to cut production

» An American welcome to assign Al-Kazemi: patriotic and competent

» Trump: We have reached the peak of proliferation of corona and vaccine soon

» A parliamentary source: Al-Kazemi will pass a simple majority if the secret vote is adopted

» The first American position on the assignment of Al-Kazemi

» In the document .. The government directs to prepare a study to reduce the price of the Internet and

Yesterday at 3:53 pm by wciappetta

» Reuters: OPEC + is working on a two-year agreement to be implemented gradually

» High Commission sets controls on the entry of diplomats and staff

» Officially ... the President of the Republic assigns Al-Kazemi the prime minister

Yesterday at 11:34 am by lesley.beter

» After hours of commissioning ... a Kurdish leader: Our ministers define them, not Al-Kazemi

» Deputy: Al-Kazemi's booth will include most of the ministers of Abdul Mahdi's government

» Witness: What you do not know about the Iraqi Prime Minister-designate

» The stability of the dollar in Baghdad

» Victory: We are keen to reach understandings to form a new government away from any external guardia

» The mullahs continue their lies and despise its people: Corona should not distract us from the consp

» In the first statement after his appointment, Al-Kazemi pledged to form a crisis-resolution governme

» After being assigned to form a government, Al-Kazemi makes three pledges to the people

» Deputy Al-Halbousi on the assignment of Al-Kazemi: He has a better chance than Allawi and Al-Zarfi

» Allawi: I agreed with Masoud Barzani more than two months ago to introduce Al-Kazemi's name

» Al-Amiri: The largest bloc has deserved its entitlement, and we will support Al-Kazemi

» Deputy in victory: Al-Zarfi will apologize for accepting any position in the next government

» In the first comment after the commissioning, Al-Kazemi vows to form a government with these specifi

» Al-Abadi Coalition: Al-Kazemi is a strong figure who will be able to form a government

» Commissioning and apology for commissioning ... a dirty game exposing the Iranian plan in Iraq

Yesterday at 5:03 am by wciappetta

» Completion of the emergency grant database for more than 20,000 citizens in Basra

» Barham Salih: Mustafa Al-Kazemi's assignment was carried out with a broad political consensus

» Al-Hakim, Al-Amri, Al-Fayadh, and Al-Kazemi arrive at the presidential palace to receive the new ass

» Ali Al-Tamimi: Al-Zarfi's apology is a diplomatic diplomat ... and the new one is charged with the l

» Ahead of Al-Zarfi’s speech: Conflict over the fact that the taxpayer withdrew .. Will the “upcoming

» a political source for "al-ahed news": zarrafi's fortunes have expired

» Al-Zarfi announces withdrawal from the formation of the government

» Economic destabilization in Iraq and an uncomfortable "Corona" truce .. What about containing the mi

» The New York Times: Corona hit dozens of members of the royal family in Saudi Arabia

» A deputy for change: Support or rejection of any person assigned to the prime minister should be sub

» Economists send a message to the Prime Minister: These people are trying to seize the capabilities o

» The National Security Council discusses the file of Iraqi-American relations

» Sources: Pressures from parties loyal to Iran compel Zarrafi to apologize for assigning him

» Other: Sitting close to giving confidence without agreeing to ensure a quorum

» Iqbal pharmacist: We are with the consensus of the Shiite component to choose a prime minister

» Tariq Harb: It is not permissible to replace Al-Zarfi, except by conceding it or not granting him co

» Kurdish MP: Support or rejection of the taxpayer should not be dependent on promises and deals

» His office ... Al-Zrafi will hold a press conference this morning

» Turkmen Front: We hope that Al-Kazimi's assignment will be a fact, not a patchwork for the continuat

» Parliamentary consensus to give confidence to the alternative Zarfi

» The release of frozen Iranian funds in Europe

» Before the OPEC + meeting ... Russian Energy: We are ready to reduce production by 1.6 million barre

» Legal expert: Al-Zrafi’s assignment does not end with two cases

» Abdul-Mahdi: Washington proposed to hold a strategic dialogue with Baghdad next June

» Al-Taie: Al-Zarfi is courting America with the aim of committing new crimes if he does not get the p

» Deputy for Al-Fateh: Al-Zarfi will fall in the first round and whoever bets on him is a "loser"

» Deputies confirm that Al-Zarfi apologized for forming the government today

» Deputy: Support or rejection of the taxpayer must be subject to his program

» Dhi Qar Oil: We are ready to operate the discontinued Gharf field if the Ministry agrees

» Financial Advisor: Iraq is committed to fulfilling its financial obligations and obtaining creditwor

» Work: We will take measures against private companies that cut salaries and dismiss employees

» Dr. Iyad Allawi: The next government will be temporary and does not need lengthy government programs

» Al-Ziyadi / Lenina /: Al-Zrafi will not withdraw from the mandate ... and the parliament will be Al-

» Japanese Finance: Tokyo will pledge a contribution to a trust fund for the countries affected by Cor

» Iraq surprises OPEC a day before its expected meeting

» Corona deaths in Iran rose to more than 4 thousand

» Trade: a fleet of cars loaded with amber rice will be directed to the region