Having adopted a negative interest rate on some excess reserves to penalize financial institutions for leaving money idle, the Bank of Japan may consider helping them lend by offering a negative rate on some loans, according to people familiar with talks at the BOJ.
Such a discussion could happen in conjunction with any decision to make a deeper cut to the current negative rate on reserves, said the people, who asked not to be named as the matter is private. The BOJ’s Stimulating Bank Lending Facility, which now offers loans at zero percent interest, would be the most likely vehicle for this option, they said.
The officials said that adding this to the central bank’s arsenal could have a positive impact on the economy, but would also raise questions about giving subsidies to commercial lenders. Financial institutions, who already feel penalized by the existing negative rate, could face demands from borrowers to cut their lending margins further, said the people.
Bank shares rallied on optimism the measure could be adopted, and the yen dropped. Economists at BNP Paribas SA, Credit Suisse Group AG and Morgan Stanley MUFG Securities are among those who have anticipated the possibility of the BOJ adopting this kind of measure.

The BOJ had extended 24.4 trillion yen ($223 billion) of credit under the Stimulating Bank Lending Facility as of April 10. This initiative is separate to the core of the BOJ’s monetary easing initiative, which targets an expansion in the monetary base, mainly through purchases of government bonds. It was initiated under former BOJ governor Masaaki Shirakawa in December 2012.
The BOJ board next meets to set policy April 27-28, and analysts have increasingly seen a likelihood of some sort of action to counter an appreciation in the yen and damage to expectations for inflation; 23 of 41 analysts surveyed by Bloomberg predict some step. Nineteen forecast increased purchases of exchange-traded funds, eight project a boost in bond buying and eight see a cut in the key rate, the survey shows. 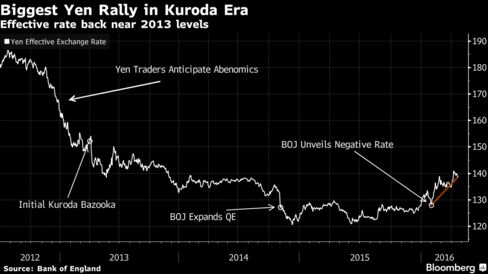 Against the dollar, the yen slid 1 percent to 110.58 as of 4:59 p.m. in Tokyo, helping pare some of the currency’s appreciation since BOJ policy makers last gathered. Governor Haruhiko Kuroda flagged his concerns about a strengthening in the yen in an interview with the Wall Street Journal last week. That sentiment is shared by senior officials at the central bank, people familiar with the discussions said earlier this week.
European policy makers also have taken a step toward providing subsidized funds for banks to lend to their customers. In a program set to start in June, the European Central Bank is poised to offer zero-rate funding, which could retroactively be cut to the ECB’s deposit rate -- currently minus 0.4 percent -- depending on how much the lender extends to companies and households. The facility is known as the TLTRO-II.

In Japan, where the sub-zero rate became effective in February, a survey of senior loan officers showed this week that banks’ profit margins from lending to highly rated companies dropped to the lowest level in almost a decade. The BOJ’s quarterly survey also showed that demand for credit from large, medium and small-sized firms all dropped.
“This wouldn’t address the underlying structural problem for the banks, which is not a loan supply issue but a demand issue,” Jefferies Group LLC analysts including Mac Salman wrote in a report.
The BOJ said its semiannual financial system report on Friday that its monetary easing with a negative interest rate “will exert further downward pressure on financial institutions’ profits for the time being.”
Bank shares, which were hammered in the wake of the BOJ’s January unveiling of a negative rate on a portion of the cash they park at the central bank, jumped Friday. The Topix Banks Index closed 4.8 percent higher, outpacing the broader Topix index.
The chart below shows which categories of financial institutions are most affected by the existing negative rate.
http://www.bloomberg.com/news/articles/2016-04-22/boj-officials-said-to-eye-possible-negative-rate-on-loan-program 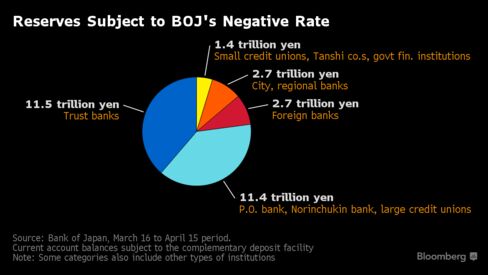 Takashi Shiono, an economist at Credit Suisse in Tokyo, said he expects the BOJ to introduce the negative rate for lending in conjunction with a cut to the rate on excess reserves.
“The BOJ can say this will help the whole economy because the banking sector is one of the most vital channels for monetary policies,” Shiono said Friday.
UBS AG’s Group’s Daiju Aoki said demand for loans from companies has been weak to begin with, so finding borrowers will remain challenging.
“Such measures by the BOJ alone may not work effectively, unless it works together with the government,” Aoki said. “A policy mix with fiscal spending or the growth strategy which spurs private demand is needed.”

» Here It Comes: New York Fed President Says "If Economy Weakens Further, Would Consider Negative Rate
» Economic parliamentary: the case of loans, "negative" and carry a big burden future generations to p
» Iraq's political differences and the fluctuating dinar exchange rate had a negative effect on the ec
» Two officials: an agreement with the IMF to lend Iraq $ 5.4 billion interest rate of 1.5%
» Al-Rafidayn responds to news of a 50% increase in interest