"Blockbuster: Washington Post is in violation of the Hatch Act, the CIA never told them Russia hacke

"Blockbuster: Washington Post is in violation of the Hatch Act, the CIA never told them Russia hacke

If you read the subsequent posts on this page I was guessing the whole thing would backfire, AND IT DID BIG TIME. HERE IS THE STATEMENT JUST RELEASED BY THE CIA:

"It's an outright lie," a CIA analyst divulged to True Pundit. "There's nothing definitive like that. There are leads from activity originating in Finland, Italy, Norway, Sweden, Britain, France, China and Russia."

Multiple CIA sources are now denouncing the Washington Post for knowingly reporting misleading national security intelligence. Intelligence insiders said no one in the Agency or in the FBI, who is running at least one parallel inquiry, has ruled out a possible internal leak within the Democratic National Committee from actor(s) inside the United States who funneled private DNC emails to WikiLeaks." This is not my dig, see it at the True Pundit

Hillary is pushing for a ruling for the electoral college to be briefed on how Russia helped Trump hack the election before they vote! I see a little problem with this - and that is that most likely the electoral college hates her guts, and is probably predominantly pro trump even on the Democrat side. All but ONE of the people saying they are going to be "faithless electors" is a democrat, that is supposed to vote for Hillary. That speaks volumes. 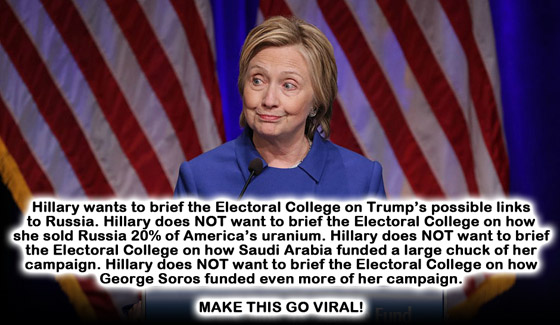 » Washington Post catalogues the biggest lies Obama ever told
» A newspaper close to Khamenei attacks Al-Kazemi over his statements in Washington
»  The Washington Post reported a "deal" between Russia and Israel on Syria.
» The Washington Post reveal who arranged to meet Trump and Russia
» Deputies of the capital: Abdul Mahdi told us to assign the post of Secretary of Baghdad to this char

Yesterday at 6:46 pm by Screwball

Yesterday at 6:43 pm by Screwball

Yesterday at 6:38 pm by Screwball

Yesterday at 6:37 pm by Screwball