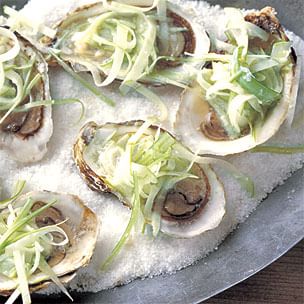 Prep Time: 15 minutes
Cook Time: 0 minutes
Servings: 4
Plump, briny, Atlantic oysters are cleverly offset by tangy green apple and pungent horseradish in the crunchy slaw that tops them here. A small amount of crème fraîche mellows the assertiveness of the topping, and its richness matches that of the oysters.

Scrub the shell of each oyster with a stiff-bristled brush and rinse thoroughly under cold running water. Discard any oysters that do not close when touched.

To shuck each oyster, grip it, flat side up, with a folded kitchen towel (to protect your hand). Positioning an oyster knife to one side of the hinge (opposite the concentric ridges of the shell), push the tip between the shells and pry upward to open. Keeping the blade firmly against the top shell, run it around the perimeter of the oyster to sever the muscle holding the shell halves together. Discard the top shells. Run the knife underneath the oyster to free it from the bottom shell, being careful not to spill the juice, or liquor, and then set the oyster in its shell on a plate. Repeat with the remaining oysters. Refrigerate the oysters until ready to serve.

Peel, quarter and core the apple. Using a mandoline or a large, sharp chef's knife, slice the apple quarters paper-thin. A few at a time, stack the slices and cut them into thin julienne. Cut the celery into thin julienne less than 1 inch long. In a bowl, combine the apple, celery, horseradish and crème fraîche and mix gently until well combined.

When ready to serve, pour a thin layer of coarse salt onto a platter. Arrange the oysters on top of the salt, taking care not to spill the juice. Spoon an equal amount of the apple-horseradish slaw on top of each oyster and serve immediately; provide small shellfish forks, if desired. Serves 4 to 6.