How can China crush America in the trade war?

How can China crush America in the trade war? 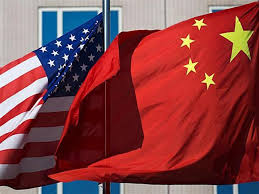 Follow - Mawazine News
Beijing is targeting US farmers to undermine their support for President Trump's economic war on China.
The OECD said in its September 19 report that the global economy is expected to grow at the slowest pace since the financial crisis, as investment and trade falter The escalating dispute between the United States and China, which could cause greater losses in the coming years.
He believes that the data could not be good news for President Trump, at a time when he faces many challenges during the year in which he will seek to win a second term.
Trump now seems to be contemplating a way out of his policy of harshly dealing with China. The question is: does Beijing have any enormous encouragement to help the US president get out of this impasse, or will it play patience to get a better deal with the Democratic candidate who might succeed Trump in the 2020 election?
Negotiation style
and alerts the writer to negotiate with all obtrusive policy , which was adopted by the Trump led him in a real dilemma, because although his supporters love his attack on China, they may give up his support in light of the economic problems caused by the policy.
He explains that Trump's negotiating approach is to identify and focus on the opponent's weaknesses. It also follows a reckless and aggressive approach, pretending to push things to the brink, and then retreating at the last moment in the hope that it will succeed through threats to get the opponent to accept the agreement offered. Trump summed up this negotiating approach by saying, "My way of making agreements is very simple and clear. I set high goals, then I press, push and push to get what I want."
The Chinese negotiating style, which he himself observed when he worked as a diplomat at the US embassy in Beijing in the 1990s, seems quite different from the pressure that Trump referred to in his book.
Although communist leaders in Beijing can engage in enthusiastic revolutionary rhetoric, there is a cultural tendency to settle serious issues behind closed doors while drinking tea. Most Chinese negotiators are horse traders willing to accept the principle of mutual benefit to come up with an agreement that saves each side face. .
In contrast, Trump's style relies on tweeting, sharp fluctuations in positions and negotiating conditions, reminding the Chinese of what they see as Western barbarism and arrogance in dealing with China.
Chinese
leaders endure Chinese leaders seem to be confident that Trump can outdo his favorite game, which relies on pressure and threat when negotiating. Under this approach, Beijing adopts an old Chinese saying, "Dose the gallbladder." This idea means that when the world's two largest economic powers are engaged in a huge conflict after three decades of trade interdependence, the consequences of this break will be dire for both sides.
Chinese leaders seem certain that hundreds of millions of middle-class people in their country can bear the consequences of this war and bitter the bitterness of spoiled Americans.
This belief is based on the fact that the Chinese people have passed more than a hundred years of invasion, famine, civil war and revolution, after the economic conditions in China, which was the richest country in the world at the time of the American Revolution. Adding a trade war with Washington would not change much of the Chinese who have been struggling for years in agriculture and industry.
Strategic blows
Beijing, for its part, managed to strike Trump strategically, damaging his presidency chances, by imposing counter-tariffs on the products of his peasant farmers in states considered crucial to the outcome of the election, such as Iowa and Wisconsin.
A second slice of Trump's main backers, mothers who rely on cheap shopping, is now facing a rise in prices for products not made in China. The reason for this is that Trump asked US companies to look for alternatives to China to supply these products, which led to higher prices affecting the purchasing power of the middle class.
Some of Trump's supporters, like Republican Sen. Tom Cotton of Arkansas, have tried to reduce the political cost of the US president's trade war with China.
In a television appearance on May 13, Coton stated that "these tariffs will harm the Chinese and some Americans, and they will certainly hurt China more than America because the Chinese companies and government have been deceiving us for a long time. Of course there will be some sacrifices on our part. But I guarantee you that this sacrifice will be small compared to the sacrifices made by our soldiers around the world. ''

» NATO: Our mission in Iraq is to train and provide military support to the Iraqi armed forces

» Deputy in victory: a looming agreement on the government's crisis

» Iraq ranks 118th in the world in democracy

» Planning: decrease in the monthly inflation rate by (2%)

» Al-Aqabi: The border outlets are able to provide 15 trillion dinars for the state budget

» Iranian Defense Minister: Our targeting of Al-Asad base was at the highest level of standards

» Parliamentary Legal: Parliament sessions continue until the third of next month

» National Union: The President's Threat ... A Threat to Iraq

» Constitutional Amendments Committee: We have achieved 50% of the constitution ... and these articles

» Urgent .. Al-Ubaidi: The demonstrations of the Sadrist movement tomorrow will be in Jadiriya and not

» A parliamentary proposal to repeal the Law of Popular Medical Clinics

» A deputy ruling out the withdrawal of US forces: Any talk otherwise is a waste of time

» Al-Sadr singing: The hour of independence and sovereignty has come .. They rushed to support the cou

» Deputy for Saeroun: The stage requires a non-dialectical figure to save the country, with no consequ

» A spokesman for al-Sadr reveals exciting details about the snipers of the demonstrators: Kurds close

» NATO: The training of the soldiers must continue to ensure that we do not return

» Parliament is close to completing the constitutional amendments

» Iraq .. The first statement from the Al-Fateh Alliance about the meeting between 'Saleh' and 'Trump'

» Speaker Al-Sadr: “Very close” to Abdul-Mahdi, behind the killing of the demonstrators

» The price of the dollar and currencies in Baghdad today

» Saleh: We seek good relations with everyone and we have no interest in being drawn into conflicts th

» Iraq is ranked sixth "Arab" with the most corruption in 2019

» Supreme Judiciary: Some of us ask us to perform tasks that are not within our jurisdiction

» The Supreme Council: Another demonstration after "Million" on Friday ... and the general strike is c

» Supplying the national system by 280 MW

» Saleh: The state pays the salaries of half a million workers who work in idle companies

»  Oil falls by about 2% and falls to its lowest level in more than a month, with increasing fears of

» In pictures ... 16 members of law enforcement were wounded in the Basra demonstrations

» Mr. Ammar Al-Hakim calls for preserving the independence of the judiciary and distancing it from pol

» Expert: Telecom companies taxes of 15%, up to 400 million dollars annually

Yesterday at 9:12 pm by lonelyintexas

» Al-Sayyadi: Trump has crossed all red lines and some ingredients want to sell us to the Americans

» Al-Alawi: Washington is the one who brought Saleh to the presidency and cannot return a request to i

» Economist: The agreement with China will be implemented within the next five months

» Minister of Planning: Al-Fao port is the highest priority and will be implemented according to the I

» British Ambassador in Iraq: There is no justification for using excessive force against the demonstr

» Al-Azzawi: Iraq is a free country and does not need Iranian human idols

» Repeat what Barzan Al-Takriti did ... Details of the new scenario to assassinate Iyad Allawi

» 600,000 families are included in the social protection program during this year

» Sadikoun comments on Saleh's meeting with Trump: The statesman should not provoke the feelings of hi

» Saleh Al-Iraqi regarding Friday demonstrations: None of us attacks the Tishreen rebels, even with a

» Prime Minister .. President Saleh's continued rejection of the candidates for the position and the g

» Examining the presence and reduction of foreign forces ... A presidential statement reveals details

» Khazali: Next Friday will be a revolution of twenty seconds

» Sources: There are new, non-current names presented to the Prime Minister