A mail box sits on an abandoned well pipe near blooming peonies, logs snag on metal casings rising out of a creek, children swing next to rusted pump jacks.
In Pennsylvania, birthplace of the U.S. oil industry, century-old abandoned oil wells have long been part of the landscape. Nobody gave much thought to it when many were left unplugged or filled haphazardly with dirt, lumber and cannon balls that slipped or rotted away. 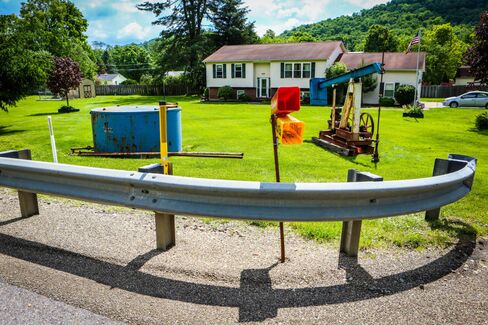 A home in Pennsylvania with an old pumpjack and tank in front yard.

But the holes -- hundreds of thousands of them pockmark the state -- are the focus of growing alarm, especially those in close proximity to new wells fracked in the Marcellus shale formation, the nation’s largest natural-gas field. They leak methane, which contaminates water, adds to global warming and occasionally explodes; four people have been killed in the past dozen years.
“We had so much methane in our water, the inspector told us not to smoke a cigar or light a candle in the bath,” said Joe Thomas, a machinist who lives with his wife, Cheryl, on a 40-acre farm with at least 60 abandoned wells. Patches of emerald-hued oil leech to the surface, transforming the ground into a soupy mess.
Hundreds like the Thomases live over lost wells.

Now the state’s attorney general is reviewing rules requiring drillers to document wells within 1,000 feet of a new fracking site. This puts Pennsylvania among states such as California, Texas, Ohio, Wyoming and Colorado confronting the environmentally catastrophic legacy of booms as fracking and home development expand over former drilling sites. 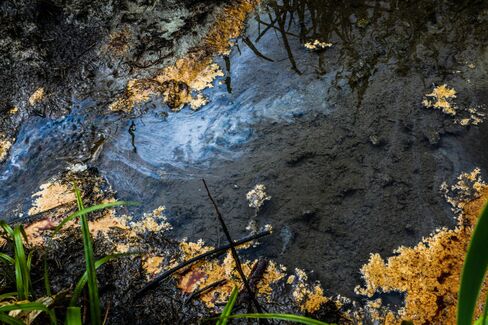 Oil and other pollutants from an abandoned oil well on the property of Joe and Cheryl Thomas.

As the number of fracked wells increases, so does the chance they might interact with lost wells. Pennsylvania regulators have documented several instances of fracking too close to an abandoned hole, causing methane to leak into homes, the air or water.
At least 3.5 million wells have been drilled in America since operators plumbed the first hole in the small Pennsylvania town of Titusville back in 1859.  It was oil pumped from this rugged landscape, near the state’s western border with Ohio, that John D. Rockefeller started refining a few years later in a venture that would evolve into the Standard Oil Trust.

Today, about a quarter of the 3.5 million wells across America are active, leaving an inventory of 2.6 million that are no longer in use. The locations of some inactive wells are documented, but little is known of the whereabouts of wells drilled before permitting regulations were enacted 60 years ago. Only 10 percent of abandoned wells are recorded in state databases -- meaning there are years of work ahead to locate and plug them. Seth Pelepko of Pennsylvania’s Department of Environmental Protection says the agency has plugged only 3,000 such sites in 30 years. 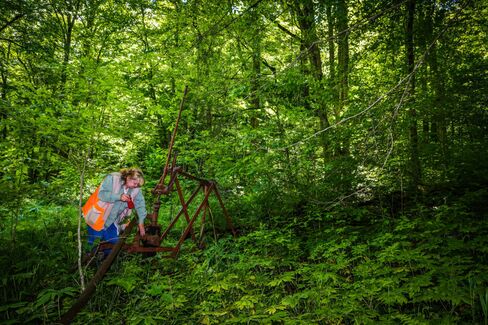 Barr points out an abandoned oil well in the Allegheny National Forest.

Regulators are ramping up detection efforts, including testing the use of drones equipped with magnetometers. For the moment, however, they rely on a low-tech solution of “citizen scientists” who hunt for leaking wells near watersheds and recreation areas in the Allegheny National Forest.
Laurie Barr is one.
On a recent search, Barr overcame her fear of rattlesnakes sunning in dense grass, bears lurking in hemlock groves and bees -- she’s allergic -- nesting in moss-covered logs. Wearing an orange pocketed vest stuffed with a GPS, mace, a water tester and a methane sniffer, Barr forded a stream and hiked downhill deep into the trees. She urged companions to “remember that rock” to find the way back. The stones, however, all looked the same.

An hour later, she came upon a decades-old rusty pipe and overturned well equipment sticking out of a ravine. Fluid poured out of the abandoned well, which Barr reported to regulators in 2014. The noonday sun reflected a rainbow-colored sheen of oil off a pool surrounding the site. Officials have yet to investigate.
“If you were in Pittsburgh and knew this was happening thousands of times in your watershed, you wouldn’t be so happy,” said Barr, who co-founded Save Our Streams Pennsylvania in 2011 to search for such sites. She’s located about 1,000; most hadn’t been recorded in the state’s system. The state is clarifying coordinates before visiting some wells, said the DEP’s Pelepko.
Hiking through swamps, Barr pointed out a well spewing orange bacteria into a stream, a hole frequented by deer burping methane and brine, and a long rusted pipe with gas bubbling around it into the Allegheny Reservoir.

“The assumption was these wells are not emitting much methane and we don’t need to worry about them,” said Mary Kang, a postdoctoral fellow at Stanford University in California who co-authored a widely cited paper on Pennsylvania’s wells. “Yet these old wells are emitting methane into the atmosphere, and they are worth considering in greenhouse-gas emissions inventories.” 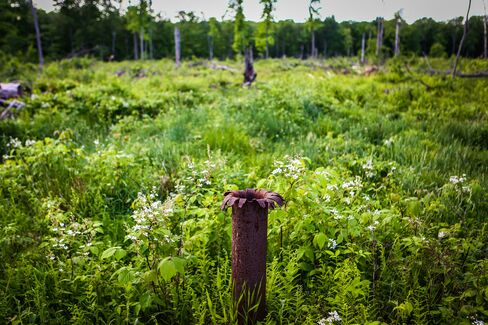 Officials also are warning private-property owners of health risks. Generations of Pennsylvanians relied on the oil patch for their livelihood and became desensitized to the industrial footprint left behind.
The Thomases, who live near the New York border, have become aware that such wells pose risks. Recently, Barr held her methane sniffer over a muddy, oily hole she dubbed “the fudge pot” at their farm as blackbirds harassed a crow overhead. Beeping wildly, the device soon hit its limit. The well is now in line to be capped.
http://www.bloomberg.com/news/articles/2016-06-20/in-the-birthplace-of-u-s-oil-methane-gas-is-leaking-everywhere

» Methane in Gulf "astonishingly high": U.S. scientist
» Europe was the birthplace of mankind, not Africa, scientists find
» Return to Camp Bucca in southern Iraq, birthplace of ISIS
» Trump to visit the birthplace of Daesh who allegedly fought in Iraq and Syria
» Microwaving The Atmosphere To Mitigate Methane