'We the People are fed up with corrupt, lying, Obama-loving politicians like you' 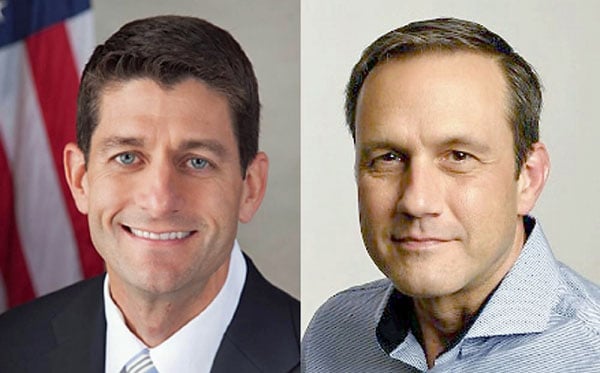 If House Speaker Paul Ryan’s own Facebook page is any indication of how well he will fare in next Tuesday’s all-important primary race against upstart challenger Paul Nehlen, it might not be smooth sailing for the 16-year incumbent come Election Day.

In fact, Ryan’s campaign is showing signs of “melting down,” at least if social media is to be taken as a barometer. The level of antipathy toward Ryan on his two Facebook sites has been heating up in recent days as the election draws closer.
“There’s such a deluge of comments negative to Paul Ryan on Ryan’s own Facebook site . Ryan’s problems with Trump are also a big factor in the backlash, you can see that in the comments,” said William Gheen, president of Americans for Legal Immigration, or ALIPAC .
ALIPAC launched a new ad campaign earlier this week casting Ryan as “Lyin Ryan,” a politician who supports Obama’s amnesty orders and his expanded refugee resettlement programs, which funnel Shariah-compliant Muslims into more than 200 U.S. cities and towns from Syrian, Afghanistan, Iraq and Somalia by the tens of thousands annually.
The stream of Facebook comments are more than 90 percent negative against Ryan as voters express their disgust with Ryan’s stance on trade and immigration.
Gheen said he noticed this momentum against Ryan started 48 hours after a WND article about Ryan’s pro-refugee stance and the new ad campaign was linked to the Drudge Report.
The GOP primary race for Wisconsin’s first congressional district has come into national focus as Nehlen has shown himself more than capable of taking on the Ryan juggernaut. Ryan started out with a massive lead over the unknown Nehlen, an inventor who has employed hundreds in his successful water-filtration manufacturing business over the years.
As a one-time Ryan supporter, Nehlen decided to run against him because of the damaging effect Ryan-supported secret trade deals were having on all but the largest U.S. businesses. Immigration is his other hot-button issue, and he supports GOP presidential nominee Donald Trump on the need to rein it in, build a wall on the U.S. southern border and take a hard look at the numbers of Muslim migrants flooding into the country.
Gheen says he senses a turn in the race similar to what happened in Virginia in 2014, when House Majority Leader Eric Cantor went down in a stunning defeat to an unknown candidate named Dave Brat.
“The negative reaction we are seeing against Paul Ryan nationally is stronger than what we saw brewing against Eric Cantor the week before his political demise in 2014,” said Gheen.
It’s a general rule of thumb in politics that the candidate who spends the most wins 94 percent of the time.
But there are exceptions, and often those exceptions occur when the underdog makes immigration his or her biggest issue, Gheen said.
Rep. Dave Brat, R-Va., got outspent by Cantor by a 40 to 1 margin, yet Brat was able to vault ahead of a well-financed incumbent and shock the GOP establishment. Nehlen hopes to do the same. Ryan’s strategy to counter the “Cantor effect” has been to simply misrepresent himself on immigration, lying about his desire to tighten up the border and implement better screening for refugees, Gheen said.
This despite the fact that Ryan negotiated a $1.1 trillion omnibus bill in December 2015 that fully funded all of Obama’s amnesty and refugee expansion plans.
“But let’s not kid ourselves, Paul Ryan is a Goliath, and whether he falls or not our plan is to throw as many rocks at him as we can,” Gheen said. “He knows that not protecting the border and not protecting Americans is his Achilles’ heel, and he needs to spend a lot of money pumping the lie out there. So you have many Wisconsin voters who only hear that lie, that expensively advertised lie, where he’s telling them what they want to hear about himself, while doing something completely different with Obama in D.C.”
In many ways, the Ryan-Nehlen primary is a microcosm of the national Clinton-Trump race where one candidate represents the globalist establishment’s interests and the other candidate represents populist issues that resonate with the beleaguered middle class.
“It’s big money paying for big lies, and unfortunately that works most of the time. But what you’re looking at right now in Paul Ryan’s district – it’s that big money with big lies that’s killing America,” Gheen said. “This race is the quintessential example of the root of what’s wrong with America. It’s the root of all American evil, with the money and the lies and the money backing the lies aimed at Republican voters.”
Nehlen said in a July 30 interview with Fox Business Network’s Lou Dobbs that he believes Ryan, if re-elected, would serve as a thorn in the side of a President Donald Trump.
“With one vote, we can take back our nation from Paul Ryan’s special interests,” Nehlen said. “With our one vote, we can stop TPP and stop amnesty. It is vitally important that we do this, because with President Trump in place, Paul Ryan will be nothing but a problem. He will thwart President Trump at every opportunity.”
Watch Nehlen’s interview with Lou Dobbs: - use link