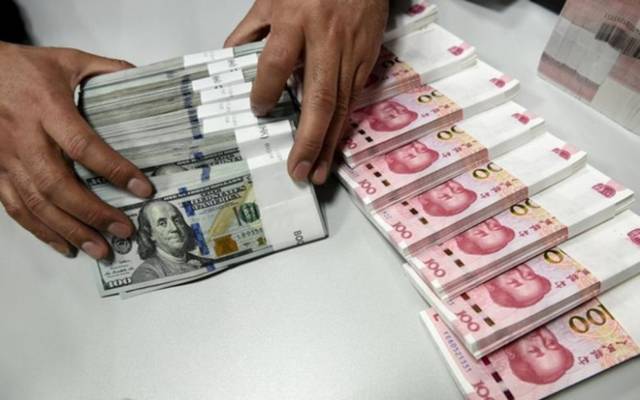 01 February 2019 11:42 p
Direct : China continued the largest holder of US debt reduced holdings of Treasury bonds in the largest economy in the world at the lowest level in a year and a half last November.
China's Treasury bond holdings reached $ 1.12 trillion in November, the lowest level since May 2017, a level lower than the October record of $ 1.13 trillion, according to data released by the US Treasury Department on Thursday.
Japan, the second-largest recipient of US debt and the last in terms of holding US bonds worth more than $ 1 trillion, increased its holdings of US Treasuries to $ 1.03 trillion in November, from $ 1.01 trillion a month earlier.
In the third to fifth centers where Brazil, Ireland and the United Kingdom, their holdings of US bonds were reduced at levels of 311.4 billion, 279.6 billion and 258.6 dollars, respectively.
Countries in sixth and seventh positions, Switzerland and Luxembourg, increased their holdings in US debt at 227.5 billion and 225.7 billion dollars, respectively.
For the Cayman Islands, which finished in eighth place, it reduced its holdings of US bond assets from $ 208.2 billion in October to $ 207.5 billion in November.
At the ninth to tenth level, US bond holdings in Hong Kong and Belgium increased by $ 189.2 billion and $ 173 billion.

Russia and China give up US bonds

Russia and China give up US bonds

Information / Baghdad ..
China and Russia have cut their holdings of US government debt, while Saudi Arabia has left the list of top 10 US bondholders, data released by the US Treasury Department on Thursday showed.
China's holdings of US Treasuries reached $ 1.21 trillion in November, down from $ 1.138 trillion in October.
Still, China remains the largest holder of US Treasury bills and bonds outside the United States, followed by Japan at $ 1,036.6 billion.
Besides China, Russia cut its investment in the bonds last November by $ 1.8 billion to $ 12.8 billion.
This comes as part of a plan to move away from the dollar under Washington's sanctions policy against Moscow, which in April and May reduced its holdings of these bonds from $ 96 billion to $ 15 billion.
Treasuries are a means of raising funds from countries and institutions, repayable by the US government at maturity, which varies by bond. US bonds are attractive for low risk of default, which explains their low interest rates. Interest rates
https://www.almaalomah.com/2019/02/01/386534/

» Trade: One million and 700 thousand will be included in the food basket

» The Bahrain Bourse witnesses the largest listing through oil and gas

» Sulaymaniyah: The exchange rate of the dollar is (168) thousand, and the reason for its rise is "sta

» Kurdistan Regional Government: We will not allow the market to be monopolized under the pretext of t

» The President of the Republic: It is unacceptable to justify the continuation of the file of the dis

» Kurdistan Democratic Party: We are working to change the structure of the Federal Court in form and

» Bank sales of the dollar decreased in Tuesday's auction

» A specialized organization: Transparency International's report reflects the reality of what is happ

» The Iraqi Ministry of Oil: They are serious about addressing the increased demand for some oil produ

» Trade: 1.7 million employees whose salaries are less than two million dinars will be included in the

» Gas prices in Kurdistan set a record, and Baghdad provides Sulaymaniyah with one million liters of o

» The "framework" follows Al-Kazemi's steps in the Basra-Aqaba pipeline, and a faction in the crowd th

» (Corrected) It was preceded by an American negotiation.. An Iraqi tendency to adopt the price of the

» A government advisor identifies 3 files on the Sudanese priority list

» Political activist: Demonstrating for the dollar is useless, the culprit must be targeted