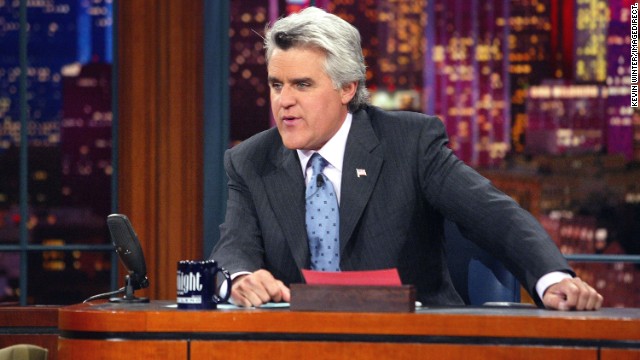 Now that he's out from behind the "Tonight Show" desk, Jay Leno is spending his time giving back to soldiers.

(CNN) -- Jay Leno and Cpl. Ethan Laberge don't have much in common.

One is best known as a comedian and the former host of "The Tonight Show," while the other is recovering from serious injuries he sustained while serving in Afghanistan.

But there is one thing these two share, and that's a love of cars. So to say thank you to Cpl. Laberge for his service, Leno decided to gift the soldier with something that he knew he would enjoy: a brand new Dodge Hellcat.

"When I travel to entertain the troops, the best part ... is the few minutes I get to spend with each soldier," Leno said on "Today" Wednesday. "Behind every handshake, every hello, is a great kid. And I wanted to introduce the world to one of them. We sort of took all these wounded warriors and did a lottery and picked a soldier at random and drew something for him, and hopefully, it expresses what we want to do for all soldiers."

Laberge was on foot patrol in Afghanistan when a suicide bomber detonated himself on the street where Laberge was standing. The soldier has had 10 surgeries to try to repair what was damaged, but he still suffers from constant pain, in addition to memory loss caused by a traumatic brain injury.

Leno hoped to take his mind off some of that with the simple gift of a joyride in a 2015 Dodge SRT Hellcat through the open roads of Fort Campbell, Kentucky.

"Sometimes I think when you're a soldier, you get this feeling that you're all alone and the rest of the country doesn't care," Leno said. "So when people take a moment to stop and go, hey you, thank you very much -- I think it does something for them."

Once they were done taking turns behind the wheel -- and after a pit stop for some barbecue -- Leno handed the keys to the Hellcat over to Laberge.

"It's yours," Leno told him. "America loves you. Thank you. Have a lot of fun, don't get any tickets."

To which Laberge quickly responded with a smile, "I can't promise that."

Leno added on "Today" Wednesday that he "wanted to do something a little bit different" to show his gratitude to servicemen and women.

"Everybody helps the soldiers with medical issues and all those important things, but sometimes, that can be like getting socks for Christmas," he said. "You want to give them something that's fun, something that has nothing to do with what happened to them."