Germany is insane: Bans pork to not offend Muslim ‘refugees’

Germany is insane: Bans pork to not offend Muslim ‘refugees’

Germany is insane: Bans pork to not offend Muslim ‘refugees’
Posted on March 7, 2016 by Dr. Eowyn |

Rebecca Perring reports for the UK’s Express, March 7, 2016, that increasing number of public canteens, child daycare centers and schools in Germany have stopped serving pork — sausages, bacon and ham — over “religious considerations” for Muslims.
Members of Chancellor Angela Merkel’s CDU party are now fighting to keep pork on the menu on the grounds that consumption of pork is part of German culture.CDU representative Daniel Günther claims that pork products are being taken off the menu in schools, nurseries and canteens across the country. Arguing that tolerance also means “the appreciation and sufferance of other food cultures and lifestyles,” Günther said, “The protection of minorities – including for religious reasons – must not mean that the majority is overruled in their free decision by ill-conceived consideration.” He said those who don’t want to eat pork don’t have to: “No one should be obliged to do so. But we also don’t want the majority having to refrain from pork. The consumption of pork belongs to our culture.”
Indeed, sausages are very much part of Germany’s culture. At Oktoberfest in Munich, the largest beer festival in the world, sausages are served alongside steins of beer.
The German Government has come increasingly under fire for its open-door policy toward “refugees” and “migrants”, which will only worsen because of this latest move to ban pork so as not to offend delicate Muslim sensibilities.
Initially hailed for her leadership over the “refugee” crisis after offering sanctuary to nearly 1.1 million refugees from the Middle East, Merkel now faces growing calls for stricter immigration rules.
To which I say, “Too little, too late.”
http://fellowshipoftheminds.com/2016/03/07/germany-is-insane-bans-pork-to-not-offend-muslim-refugees/
Neno 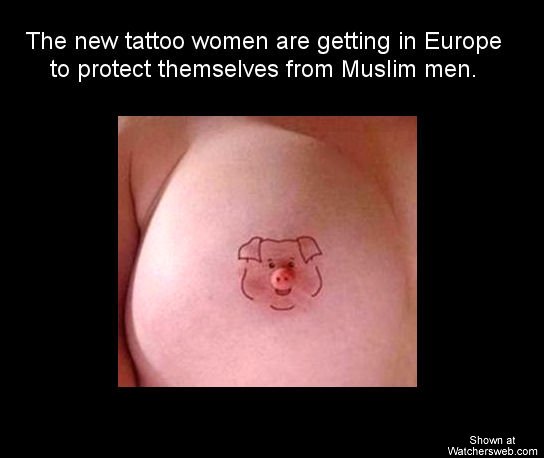 » ISIS are among us, say Muslim refugees in Germany
» GERMANY has to teach Muslim economic ‘refugees’ how not to behave like savages
» GRADE SCHOOL GIRLS in Germany Ordered to Cover Up – So As Not to Provoke Muslim Refugees
» Traditional Christian Holiday in Germany Renamed 'Festival of Lights' to Help Muslim Refugees Feel W
» Israel bans "Muslim men" without 50 years of Al-Aqsa