Social Security raise to be among lowest in years Associated Press

Social Security raise to be among lowest in years Associated Press

Social Security raise to be among lowest in years 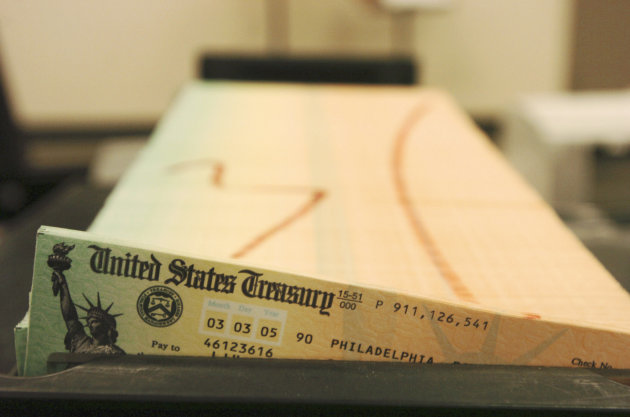 
Preliminary figures suggest a benefit increase of roughly 1.5 percent, which would be among the smallest since automatic increases were adopted in 1975, according to an analysis by The Associated Press.


Next year's raise will be small because consumer prices, as measured by the government, haven't gone up much in the past year.


The exact size of the cost-of-living adjustment, or COLA, won't be known until the Labor Department releases the inflation report for September. That was supposed to happen Wednesday, but the report was delayed indefinitely because of the partial government shutdown.


The COLA is usually announced in October to give Social Security and other benefit programs time to adjust January payments. The Social Security Administration has given no indication that raises would be delayed because of the shutdown, but advocates for seniors said the uncertainty was unwelcome.


Social Security benefits have continued during the shutdown.


More than one-fifth of the country is waiting for the news.


Nearly 58 million retirees, disabled workers, spouses and children get Social Security benefits. The average monthly payment is $1,162. A 1.5 percent raise would increase the typical monthly payment by about $17.


The COLA also affects benefits for more than 3 million disabled veterans, about 2.5 million federal retirees and their survivors, and more than 8 million people who get Supplemental Security Income, the disability program for the poor.


Automatic COLAs were adopted so that benefits for people on fixed incomes would keep up with rising prices. Many seniors, however, complain that the COLA sometimes falls short, leaving them little wiggle room.


David Waugh of Bethesda, Md., said he can handle one small COLA but several in a row make it hard to plan for unexpected expenses.


"I'm not one of those folks that's going to fall into poverty, but it is going to make a difference in my standard of living as time goes by," said Waugh, 83, who retired from the United Nations. "I live in a small apartment and I have an old car, and it's going to break down. And no doubt when it does, I'll have to fix it or get a new one."


Since 1975, annual Social Security raises have averaged 4.1 percent. Only six times have they been less than 2 percent, including this year, when the increase was 1.7 percent. There was no COLA in 2010 or 2011 because inflation was too low.


By law, the cost-of-living adjustment is based on the Consumer Price Index for Urban Wage Earners and Clerical Workers, or CPI-W, a broad measure of consumer prices generated by the Bureau of Labor Statistics. It measures price changes for food, housing, clothing, transportation, energy, medical care, recreation and education.


The COLA is calculated by comparing consumer prices in July, August and September each year to prices in the same three months from the previous year. If prices go up over the course of the year, benefits go up, starting with payments delivered in January.


This year, average prices for July and August were 1.4 percent higher than they were a year ago, according to the CPI-W.


Once the September report, the final piece of the puzzle, is released, the COLA can be announced officially. If prices continued to slowly inch up in September, that would put the COLA at roughly 1.5 percent.


Several economists said there were no dramatic price swings in September to significantly increase or decrease the projected COLA. That means the projection shouldn't change by more than a few tenths of a percentage point, if at all.


Polina Vlasenko, a research fellow at the American Institute for Economic Research, projects the COLA will be between 1.4 percent and 1.6 percent.


Her projection is similar to those done by others, including AARP, which estimates the COLA will be between 1.5 percent and 1.7 percent. The Senior Citizens League estimates it will be about 1.5 percent.


"In years with high COLA's, a lot of that had to do with fuel prices and in some cases food prices. Neither of those increased much this year," Vlasenko said. "So that kept the lid on the overall increase in prices."


Gasoline prices are down 2.4 percent from a year ago while food prices are up slightly, according to the August inflation report. Housing costs went up 2.3 percent and utilities increased by 3.2 percent.


Advocates for seniors say the government's measure of inflation doesn't accurately reflect price increases older Americans face because they tend to spend more of their income on health care. Medical costs went up less than in previous years but still outpaced other consumer prices, rising 2.5 percent.


"This (COLA) is not enough to keep up with inflation, as it affects seniors," said Max Richtman, who heads the National Committee to Preserve Social Security and Medicare.


The cost of personal computers dropped by 10.6 percent over the past year, according the CPI-W.


That's a small consolation to Alberta Gaskins of the District of Columbia, who said she is concerned about keeping up with her household bills.


"It is very important to get the COLA because everything else you have in your life is on an upward swing, and if you're on a downward swing, that means your quality of life is going down," said Gaskins, who retired from the Postal Service in 1989.

» Democrats Count of Press to Blame Trump if Social Security Defaults Temporarily
»  The dollar is recovering from its lowest level in 3 years
» Sun Activity Has Collapsed to the Lowest in 9,300 years
» Oil prices collapsed to their lowest level in 18 years
» Trump: Unemployment in America is the lowest in 50 years