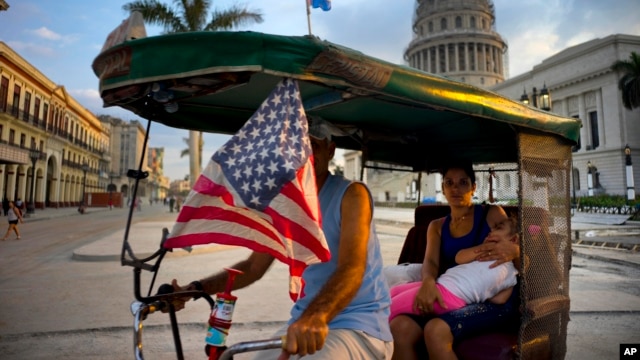 A taxi driver pedals his bicycle, decorated with Cuban and U.S. flags, near the Capitolio in Havana, Cuba, March 15, 2016. President Barack Obama, who will arrive in Havana Sunday, has been pushing for more U.S. engagement with the island nation.

Associated Press
March 19, 2016 12:12 PM
President Barack Obama aims to use his historic trip to Cuba starting Sunday to further his bid to restore ties after a half-century of acrimony. Though his visit will be one of the most visible symbols of the new approach, Obama already has been rolling back restrictions on Cuba, punching hole after hole in the U.S. trade embargo.
Here's what the Obama administration has done to increase engagement with Cuba:
- Loosened travel restrictions to allow Americans to go independently on educational, "people-to-people" trips instead of in organized groups. A formal tourism ban remains.
- Eliminated a ban on Cuban financial transactions going through U.S. banks, which effectively had cut off Cuba from the global banking system.
- Allowed Cuban citizens to open U.S. bank accounts and use them to send remittances back home.
- Removed Cuba from the U.S. list of countries with inadequate port security, making it easier for ships to travel between the two countries.
- Approved "general licenses" for U.S. travel to Cuba, meaning Americans traveling for certain authorized reasons don't have to apply for permission in advance.
- Started restoring direct mail service. The first flight left the U.S. just before Obama's trip as part of a pilot project.
- Authorized some U.S. cruise lines to sail to Cuba. They're waiting for Cuban approval.
- Struck an agreement to restore commercial flights. The Transportation Department will soon award the first flight routes.
- Authorized exports of badly needed goods ranging from constructions materials to tractor parts, though no such trade has begun. FILE - A woman waves a U.S flag in front of the U.S. Interests Section, in Havana, July 20, 2015. The U.S. has been relaxing restrictions on trade and tourism to Cuba.
- Allowed Cuban citizens to start earning salaries in the United States without having to start the immigration process, as long as they don't pay special taxes in Cuba.
- Reopened the U.S. Embassy in Havana. Cuba also reopened its embassy in Washington.
- Released three Cubans jailed in the U.S., while Cuba released American Alan Gross.
- Sat down with Cuban President Raul Castro in Panama in the first face-to-face meeting between a U.S. and Cuban leader in decades.
- Started high-level exchanges and visits between U.S. and Cuban officials.
- Increased the amount people in the U.S. can send Cubans from $500 to $2,000 every three months. Earlier, Obama removed a $1,200 annual cap on remittances.
- Permitted American travelers to return with up to $400 of merchandise, including tobacco and alcohol products worth no more than $100 combined.
- Removed Cuba from the U.S. list of state sponsors of terrorism.
- Authorized the commercial export of some communications and Internet devices including software, hardware and services.
- Allowed unlimited family visits by Cuban-Americans, before the U.S. and Cuba announced plans to normalize relations.
- Urged Congress repeatedly but unsuccessfully to lift the U.S. trade embargo.
http://www.voanews.com/content/obama-efforts-to-ease-us-restrictions-on-cuba/3245523.html