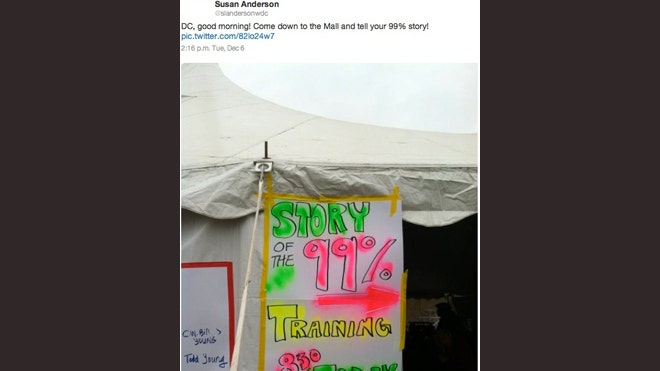 WASHINGTON – The wife of the former
IRS commissioner who ran the tax agency when it was singling out
conservative groups was apparently involved -- at least briefly -- in
the Occupy Wall Street movement.


Anderson’s active role in promoting OWS is the latest curious detail
to emerge as scrutiny focuses on her husband, ex-IRS Commissioner
Douglas Shulman.


In a Dec. 6 tweet, Anderson, a senior program adviser for the
D.C.-based group Public Campaign, tweeted “DC, good morning! Come down
to the Mall and tell your 99% story!” as well as a picture of a white
tent with a poster on the outside saying, “Story of the 99%. Training
Today 830.”


Occupy Wall Street is a movement that began on Sept. 17, 2011 in
Manhattan’s Financial District and has grown to more than 100 cities in
the U.S. The Occupy rallies sought to bring attention to the disparity
among classes in the country, though were also criticized for lacking
focus and being unruly. Multiple cities, including D.C., held their own
rallies


Anderson’s group, Public Campaign, bills itself as nonpartisan, and
states it is working with “a broad range of organizations” to reform
campaign-finance rules. However, the group receives much of its funding
from such liberal groups as the Ford Foundation, Barbra Streisand’s The
Streisand Foundation and Health Care for America NOW, a coalition of
labor unions supporting ObamaCare that includes the AFL-CIO and the
Service Employees International Union, according to the Public Campaign
website.


When the scandal over the IRS’ targeting of conservative groups broke, Public Campaign also appeared to defend the tax agency.


Nick Nyhart, chief executive for Public Campaign, suggested to ABC
News that the misdeeds of a “few bad apples” within the agency will
“make it harder for those questions to be asked without claims of bias.”


Last month, Shulman faced a tough round of questioning by Congress on
the scandal that’s weighed heavily on the federal tax collecting
agency. Shulman, who was appointed to his post by President George W.
Bush, denied knowing that the agency targeted Tea Party groups between
2010 and 2012. Others have been skeptical about Shulman’s testimony and
his knowledge of events.


Recently released reports show that Shulman made more than 100 visits to the White House.


Read more: http://www.foxnews.com/politics/2013/06/04/ex-irs-commissioner-wife-supported-occupy-wall-street-movement/#ixzz2VGJ3MiQe
_________________
For I know the thoughts that I think toward you, saith the LORD, thoughts of peace, and not of evil, to give you an expected end. Then shall ye call upon me, and ye shall go and pray unto me, and I will hearken unto you. And ye shall seek me, and find me, when ye shall search for me with all your heart.
zimi31

This whole IRS situation has my blood boiling!!! The corruption at the highest levels of this government is shocking but not surprising. If Congress doesn't use these revelations to change the tax system to a one or two page form, it will only get worse. To think that these are the same people that will be implementing Obama Care is enough to give everyone pause, even those who support it. I just watched a few minutes of the hearings and I thought my head was going to explode! After all the targeted 'people' had a chance to tell their story, Sen. McDermott actually had the audacity to tell them this was essentially
their own fault for applying for the special status! God Help Us!!!