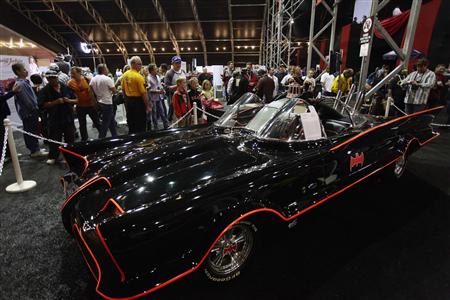 PHOENIX (Reuters) - An Arizona man with a special
fondness for caped crusader Batman and his sidekick Robin bought the
original Batmobile driven in the iconic television series with a bid of
$4.2 million at an auction on Saturday.

Rick Champagne, a Phoenix-area logistics company owner, came away
with the black, futuristic two-seater featured in the "Batman" series
starring Adam West and Burt Ward from 1966 to 1968, following a flurry
of spirited bidding at the Scottsdale, Arizona, auction.

"I really liked Batman growing up and I came here with the
intention of buying the car," Champagne, 56, told Reuters in a brief
interview moments after he bought the car. "Sure enough, I was able to
buy it. That was a dream come true."

The Barrett-Jackson auction was the first time the car was put up
for public sale. In addition to the $4.2 million bid price, the buyer
will have to pay an additional roughly $420,000 in premiums.

The Batmobile is based on a 1955 Lincoln Futura, a concept car built in Italy by the Ford Motor Co.

In 1965, the concept car was bought for a nominal $1 by noted
customizer George Barris, who had a mere 15 days and $15,000 to
transform the vehicle for the show. He has owned it ever since.

Barris told Reuters he had supplied vehicles for movies and
television shows before, but this one had to be markedly different than
the others.

"With every pow, bang, wow, wee, I wanted the car to do something
just like the actors," said Barris, 87, in an interview before the
auction. "The car had to be a star on its own. And it became one."

The car has a V-8 engine and instruments in the steering wheel, plus innovative items like a push-button transmission.

But generations may remember it best for Bat gadgets added for the
series, including a car phone and the ability to deploy such things as
oil, smoke and nails to thwart villains - not to mention twin rear
parachutes for quick Bat turns.

Barris said the vehicle toured the country after the series and a
movie and then was housed in a private showroom in California. He said
it was time to part with the popular car and let a new owner have the
Bat keys.

» Zain Iraq: Investing in the younger generations to achieve a better tomorrow for Iraqis

» The representative of the Russian President arrives in Erbil from Baghdad

» Al-Araji to NATO Commander: We are keen to implement the decision to withdraw foreign forces from Ir

» Al-Kazemi’s advisor: Adopting a price of $50 a barrel in next year’s budget

» Al-Zamili from Mosul: Entities that took advantage of their presence in the city and built economic

» Muqtada al-Sadr comments on the final results in three words

» After 40 days of polling, the announcement of the final results of the Iraqi parliamentary elections

» The Sadrist movement reveals its next step to announce the results

» An Iraqi-Turkish memorandum of understanding to curb money laundering

» Ministry of Electricity: Kurdistan Region provides us with about 650-800 megawatts

» Final results: Five seats were changed, and there was no effect on the balance of power

» Investors build ten schools in Erbil at their own expense

» Including water and customs.. The Council of Ministers issues 6 decisions

» The rule of law: the prime minister in the next government from the coordinating framework

» A winning candidate in the elections confirms: The results cannot be approved without addressing thi

» Have the results reached the Federal Court? .. The Commission answers

» Amanat Baghdad for Citizens: Do not pay a “tip” to our service mechanisms and report those who colle

» Integrity publishes the financial disclosure form for the year 2022

» Adviser to the Prime Minister reveals the amount of borrowing in the 2022 budget: There is no return

» Oil returns to rise, and anticipation of the results of today's OPEC meeting

» The dollar is rising in Baghdad

» An oil expert warns: Iraq will be greatly affected by the drop in oil

» The Ministry of Oil announces revenues and exports last month

» After dominating the Iraqi market for years, Turkey is competing with the "expensive" Chinese goods,

» An Iraqi-Turkish memorandum of understanding to curb money laundering

» Electricity announces the completion of the electrical connection with Turkey.. What about the Saudi

» Real Estate Department: Fines for limiting the division of homes into smaller spaces

» The initial report of the assassination attempt on Al-Kazemi: The attack targeted his life

» Experts: The “blocking third” is an option to form the next government

» Signing a letter of intent between Iraq, Egypt and Jordan in the field of communications

» Resources: The water crisis is "severe" and there are no signs of cooperation from Ankara and Tehran

» Political party: There is no obligation to form a majority government, and this is the closest scena

» Al-Kazemi’s advisor: Repetition of the scenario of global economic closure is out of the question

» Supported by the decline of the dollar .. the rise in gold prices in global markets

» Minister of Oil: The Sovereign Energy Fund is a guarantee of the rights of future generations

» Political analyst: The ambiguity in the investigation into targeting Al-Kazemi is an escape from con

» Al-Kazemi receives an invitation from Putin to visit Moscow

» Government loans for the acquisition of a solar energy system

» The dollar is declining in Baghdad today

» Adviser to the Prime Minister: The 2022 budget is guarded against surprises and includes appointment

» Iraq sues Iran in the International Court and confirms: Turkey shared the damage with us due to the

Yesterday at 4:51 am by chouchou

» Economist: There is no relationship between the devaluation of the dinar and the central bank's rete

» A flagrant imbalance in the balance .. Iraq is “the only absent” from the list of exporters to Iran,

» After the Pentagon's announcement, Shiite faction: We are ready

» Khazali calls on Sistani to intervene: The country's situation is dangerous and accusing the resista

» The Iraqi agriculture takes 3 decisions for the winter plan, the most prominent of which is the addi

» Minister of Electricity: 3 years separate us from energy self-sufficiency

» Kurdistan Agriculture: Iran cut off the waters of the Diyala River by 100% and changed its course

» Water Resources: Iran did not abide by international norms and conventions and cut off water complet

» Iranian Customs: Iraq imported more than $6 billion worth of goods in 8 months