After months of protests, Hong Kong is in recession

After months of protests, Hong Kong is in recession 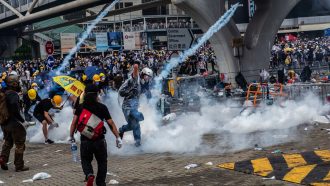 Follow - up to the balance of News ,
he said Finance Minister Hong Kong said the city has entered into a recession, after more than five months of anti-government protests, which show no signs of abating, and it is unlikely to achieve an annual economic growth this year.
"The blow to our economy is comprehensive," Paul Chan said in a post on Sunday, adding that the preliminary estimate of third quarter GDP on Thursday would show two consecutive quarters of deflation, the technical definition of a recession.
He said it would be "very difficult" to meet government expectations before the protests with annual economic growth of 0-1 percent.
The protests in Hong Kong have reached their 21st week. The black-clad protesters set fire to shops and threw petrol bombs at police, who responded with tear gas, water cannon and rubber bullets.
Protesters have repeatedly set fire to storefronts and businesses, including banks, especially those owned by Chinese mainland companies.
Authorities announced measures to support SMEs, and Chan said the measures could only "slightly reduce pressure".
"Let citizens return to their normal lives, let industry and trade function normally, and let us create more space for rational dialogue," he wrote.
Protesters are angry at what they see as increasing interference by Beijing in Hong Kong, which returned to Chinese rule in 1997 under the "one country, two systems" formula, which aims to ensure the freedoms the mainland does not enjoy.
China denies meddling and accuses foreign governments, including the United States, of stirring up problems

» The Jordanian foreign minister is visiting Iraq soon, carrying a message from the king

» Parliamentary Foreign Ministry: Iraq supports any mediation to reduce tension in the region

» Al-Fayyad Bloc reveals "Harak" to reassign Abdel-Mahdi and stresses: He was a victim of conspiracies

» Iraqi and American officials: ISIS is regaining its activity near the Iraq-Syria border

» His office announces that Sistani was injured in the thigh

» Parliamentary Economy: The Chinese Agreement will End Phantom Projects and Attempts to Fell it Faile

» Warning and a great fear of the demonstrations on the next 24 .. Will it be the end of Iraq after th

» What does Al-Sadr and its political parties want ?!