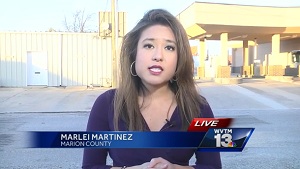 Another legally armed person has stopped a potential mass shooting in Hamilton, Alabama on February 10th, 2016.

The shooting occurred in the morning, a little over an hour before noon, over a distance of a couple of  blocks.

Two people, 67-year-old Donny Miller and 61-year-old Linda Cole were killed in separate offices.  The second victim was shot in an accounting office close to the bank pictured above.  A WVTM13 crew was on the scene less than two hours after the shooting.  Here is video from Marlei Marinez, from WVTM13.

In the video, Marlei Martinez reports that she spoke with a man who was waiting in the accounting office to file his taxes.  He heard the initial gunshots,  then pursued the shooter, and took cover behind the bank pillars shown in the image above.  He exchanged gunfire with the shooter.  The legally armed man believed that he hit the suspect, Jimmy Cooper, twice.  That is consistent with the reports that the suspect has gunshot wounds to the arm and leg.

The shooting by the armed citizen is only mentioned in the video report; there is no mention of it in the transcript.

The account appears to be verified by the Alabama Secretary of Law Enforcement.  From abc3340.com:

Although, we will conduct a thorough investigation of the officer involved shooting, the initial indication is that the deputies, officer and private citizen acted without hesitation and probably prevented the further loss of life," Alabama Secretary of Law Enforcement Spencer Collier said in a release.

It is not clear if the legally armed man shot Cooper before the Sheriff deputies arrived, or during an ongoing gunfight.  Most reports seem to be downplaying his actions.  From wbrc.com:

Authorities took Cooper into custody behind the Bank.

"He was not going to surrender. Not at all," Sheriff Williams said.

It may be some time before we learn the precise details of the shooting; but this is likely another case where a legally armed person on the scene, was able to deter and/or stop the perpetrator until the peace officers arrived.

Update: Linda Cole's daughters report that she had virtually no contact with the murder suspect for nearly 15 years.  From wiat.com:

She was one of two victims in a double homicide that rocked that small community, and according to Cagle and Todd, their mother barely knew the suspect Jimmy Cooper at all.

They said Linda Cole had no contact with Cooper for almost 15 years. But Thursday, people remembered a bright woman who was gunned down at her own firm.

The murder suspect was hit at least three times, possibly four.  His pelvis was fractured and he was hit in the leg, arm, and hand. From quadcitiesdaily.com:

Williams said at UAB, bullets were removed from one leg and one hip. Williams said he was shot in the groin area and surgery was held at UAB" to remove his testicles as a result. Cooper is in stable condition and still has a fractured pelvis, an abrasion on his left elbow and two bullets remaining in his body, Williams said.

A bullet that fractures the pelvis is an anchoring hit.  It destroys one of the main support structures of the body.  A person with a fractured pelvis may crawl, but they won't walk or run.

(c)2016 by Dean Weingarten: Permission to share is granted when this notice is included. Link to Gun Watch

Dean Weingarten has been a peace officer, a military officer, was on the University of Wisconsin Pistol Team for four years, and was first certified to teach firearms safety in 1973. He taught the Arizona concealed carry course for fifteen years until the goal of constitutional carry was attained. He has degrees in meteorology and mining engineering, and recently retired from the Department of Defense after a 30 year career in Army Research, Development, Testing, and Evaluation.﻿﻿
http://www.blacklistednews.com/Alabama%3A_Armed_Citizen_Involved_in_Stopping_Mass_Shooting/49278/0/38/38/Y/M.html
fonz1951

l would guess the cops showed up after the fact, they usually do. you know the old saying; when seconds count, police are only minutes away. too bad the perp lost his cahones and his attitude at the same time, making it sad and funny at the same time. jackass!

» The 23rd Mass Shooting Since Obama Became President Happened Last Night
» Trump to visit El Paso mass shooting site, in spite of Dems' warning to stay away
» BREAKING: US shoots down armed Iranian-made Syrian drone that was within shooting distance of Americ
» 50 Dead in Orlando Night Club Massacre, Making It Worst Mass Shooting in American History
» Araji: they are involved in the service and to achieve security of the citizen