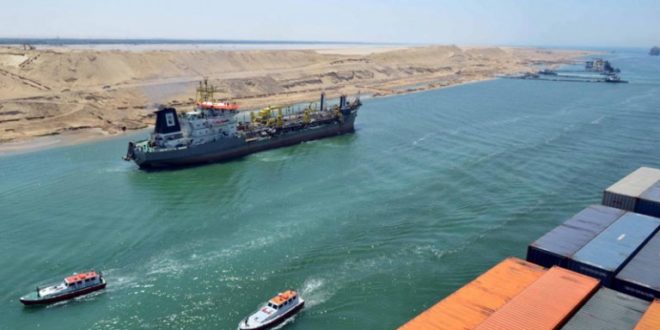 Suez Canal revenues rise to $ 503 million in May

Suez Canal revenues rise to $ 503 million in May


Suez Canal Authority Chairman Mohab Memish said the channel's revenues rose to $ 503.13 million in May from $ 479.3 million in April, adding that revenues this year could reach a record $ 5.7 billion.


The Suez Canal is the fastest shipping line between Europe and Asia and one of the main sources of foreign currency of the Egyptian government.


The channel's revenues rose to $ 63.33 million last month compared with May last year, an increase of 14.4 percent, Mamesh said.


He added that the increase in the volume of international trade and the improvement in the navigation industry showed that Egypt was right when it invested in the expansion of the Suez Canal.


"Revenues of the Suez Canal by the end of this fiscal year may be around $ 5 billion and $ 700,000, which is a record revenue for the channel," Mamesh said in a statement quoted by the official Middle East News Agency.


Official figures showed last year that the channel's revenues were $ 5.3 billion, up from $ 5 billion in 2016.


In 2015, Egypt opened a $ 8 billion canal expansion project as a key pillar of President Abdel Fattah al-Sisi's quest for an economic transformation in Egypt, the most populous Arab country.