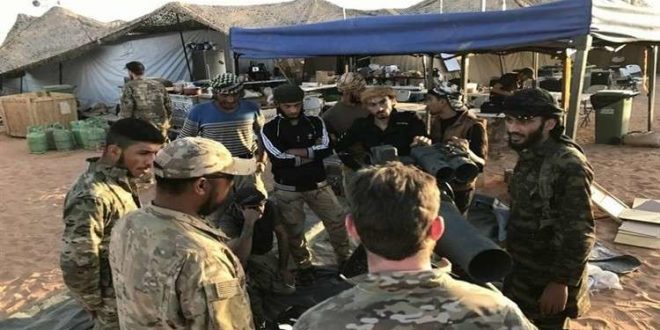 Syrian media reported that US forces and the Syrian faction, the Army of the Revolution Commanders, withdrew yesterday from the Zikuf base in the Syrian desert, 130 km from the town of Albuqmal in the suburb of Deir al-Zour.
Al-Watan newspaper quoted opposition websites as saying that the voice of the military spokesman of the Revolutionary Commanders, Abu Atheer al-Khaburi, confirmed that the withdrawal was "not to hand over al-Qaeda to the Russians, but because of the water crisis in the region. In which".
Khabouri denied reports that a US-Russian agreement had recently been signed that al-Qaeda was not considered to be part of the administrative areas of the Al-Tanf base on the Syrian-Jordanian border.
According to Al-Watan newspaper, al-Khabouri claimed that the guerrilla army had returned ten kilometers south-west of Al-Zaqf, even to repair the artesian and hand it over to the civilians, pointing out that Al-Qaeda had been protected by the coalition so far.
Al-Watan pointed out that recent developments coincide with the advance of the Syrian army on the Jordanian border and Damascus's public threat that the American presence will be considered an aggression unless Washington withdraws its forces. This was stated by Deputy Foreign Minister Fayssal Meqdad during a meeting with Al- This month, warning the United States of the need to get out of Syria or be considered an enemy force, pointing out that the Syrian state is looking at any foreign presence does not coordinate with the army in the fight against terrorism on its territory is unacceptable.
Al-Watan reported that news recently circulated about a Russian-American agreement that would ensure the full surrender of the Syrian army to the border between Syria, Jordan and Iraq, and in a second phase the withdrawal of the United States and Britain from the Al-Tanf and Al-Zaqf bases. Jordan.
It is noteworthy that the faction of the "army of free tribes" had withdrawn three weeks ago from most of the camps, which was controlled by eastern Swaida into Jordanian territory.
The region also saw a full withdrawal earlier this month, all British troops stationed in Syria.
http://www.aljournal.com/%D8%A7%D9%86%D8%B3%D8%AD%D8%A7%D8%A8-%D8%A3%D9%85%D8%B1%D9%8A%D9%83%D9%8A-%D9%85%D9%86-%D9%82%D8%A7%D8%B9%D8%AF%D8%A9-%D8%A7%D9%84%D8%B2%D9%83%D9%81-%D9%82%D8%B1%D8%A8-%D8%A7%D9%84%D8%AD%D8%AF%D9%88/