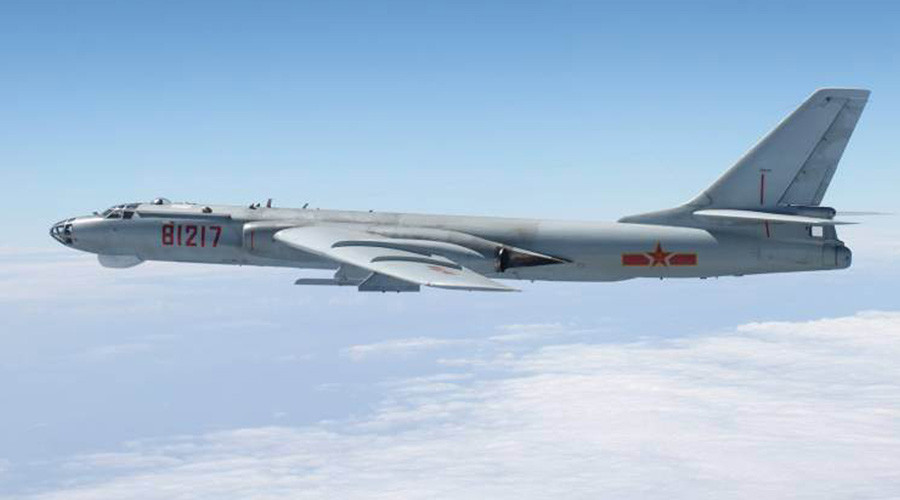 
China has said it carried out a combat air patrol over contested islands in the South China Sea. In a separate incident, roughly 230 Chinese fishing vessels and Coast Guard ships were spotted near East China Sea islets, triggering an angry response from Japan.
Several Chinese aircraft, including H-6K long-range bombers and Su-30 fighter jets, went on patrol over two contested islands in the South China Sea, Senior Colonel Shen Jinke, a spokesperson for the Air Force said on Saturday, according to the Xinhua news agency.
The warplanes were escorted by Airborne Early Warning Aircraft (AWACS) and flying tankers, which were part of “actual combat training to improve the Air Force's response to security threats,” the Air Force said.
The patrols included “air defense early warning maneuvers, air combat and island patrolling, in a complicated electromagnetic environment,” the Xinhua report said without elaborating on when the mission took place.
On Friday, roughly 230 Chinese fishing vessels and Coast Guard ships passed by the Japanese-controlled islands of Senkaku in the East China Sea. The islands are called Diaoyu in China.
Japan’s Foreign Ministry said the action was a unilateral escalation of tensions and demanded the Chinese Coast Guard vessels leave the area immediately.
“This is a unilateral act that raises tensions … and it is unacceptable to us,” Kenji Kanasugi, from the Japanese foreign ministry said, according to the Kyodo news agency.
The remote islets in the East China Sea are administered by Japan, but also claimed by Taiwan.
Tensions between China and neighboring countries are running high in the region. China, Brunei, Malaysia, the Philippines, Taiwan and Vietnam all have territorial claims in the South China Sea, with the US insisting on what it calls freedom of navigation patrols close to Chinese-controlled islands.
Beijing previously refused to recognize an international arbitration ruling – initiated by the Philippines – in The Hague that declared null and void China’s claims over the group of islands which are 230km (143 miles) northwest of the Philippines mainland.
In turn, China stepped up its military presence in the area, repeatedly saying the South China Sea islands belong to Beijing. Over the past few years, Beijing has reclaimed several atolls and built up military installations on the group of disputed islands in the area.
https://www.rt.com/news/354863-bombers-south-china-sea/