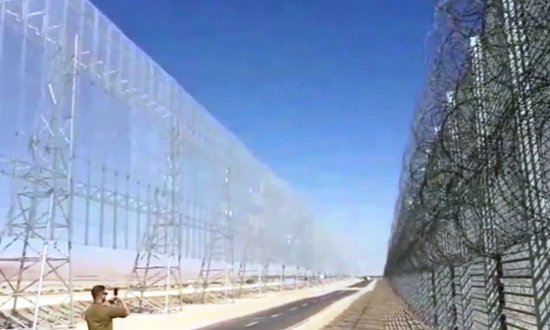 Baghdad - Agencies
The site of the "source" Israeli, the goal of a giant wall of height of 30 meters and a length of 5 kilometers; the defense of a new Israeli airport is scheduled to be built along the border with Jordan southern Palestine occupied in the Arava desert.
Construction of the wall, which cost $ 85 million, is expected to be completed in the coming months.
The Ministry of Defense (IDF), which oversees the construction of the wall, that "will include the advantages developed specifically for the protection of the airport and will be based on dozens of columns to a height of 30 meters," explaining that it "cleared dozens of mines in the area along 13 kilometers."
Speaking of the wall, Defense Minister Avigdor Lieberman said: "We are strengthening our security on the border in the face of existing and future challenges, and the obstacle we assess in the south proves our creativity and our ability to build a strong defense system," according to his claim.
The Israeli site noted that the decision to build the wall was not only to protect the airport to be built in the area, but also comes within the framework of a defensive strategy set by Israeli Prime Minister Benjamin Netanyahu.
"Israel is building a wall along the border with Egypt, along with a wall along the border with Lebanon, in addition to the wall being built on the eastern border with the Gaza Strip," he said.
VIDEO at link
http://www.aljournal.com/%D8%A7%D8%B3%D8%B1%D8%A7%D8%A6%D9%8A%D9%84-%D8%AA%D9%86%D8%B4%D9%8A%D8%A1-%D8%AC%D8%AF%D8%A7%D8%B1%D8%A7-%D9%85%D8%AD%D8%B5%D9%86%D8%A7-%D9%85%D8%B9-%D8%A7%D9%84%D8%A7%D8%B1%D8%AF%D9%86-%D9%81%D8%AF/