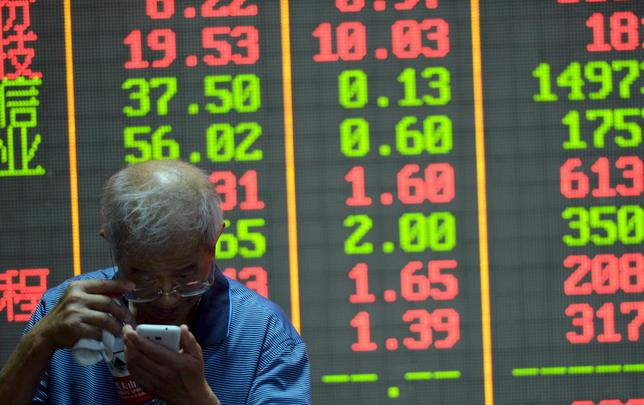 An investor checks on his mobile phone in front of an electronic board showing stock information at a brokerage house in Hangzhou, Zhejiang province, China, July 29, 2015.
Reuters/Stringer


China stepped up a crackdown on short-selling of shares on Tuesday, unveiling rules that make it harder for speculators to profit from hourly price changes, as some of the nation's major brokerages suspended their short-selling businesses.

China's stock exchanges and market watchdogs are cracking down on short-selling as part of a government-run effort to prevent a collapse in the country's markets, which have lost almost 30 percent of their value since peaking in June.

The sell-off, which followed a dizzying rally, has shattered investor confidence in Chinese stocks and shaken the faith of some foreign investors in the ability of the ruling Communist Party to maintain stability of the financial system.

The Shanghai and Shenzhen exchanges said in separate statements on Monday night that new rules, effective immediately, banned traders from borrowing and repaying stocks on the same day - a step that raises risks for short-sellers.

On Tuesday, as the markets regained ground, major brokerages Citic Securities (600030.SS ) and Huatai Securities (601688.SS ) said they would temporarily halt their short-selling services. They were joined by smaller rival Great Wall Securities.

"In order to comply with urgent changes in exchange rules and control business risks, as of today we are temporarily halting our short selling business," Citic said in a statement.

The CSI300 index .CSI300 of blue chip Shanghai and Shenzhen stocks closed 3.1 percent higher. The Shanghai Composite Index .SSEC jumped 3.7 percent to 3,756.54 points - still well off the 4,500 target set by Beijing as its benchmark for a return of market confidence.

The China Securities Regulatory Commission (CSRC) has declared war on "malicious" short-sellers and is also scrutinizing the use of automated trading strategies favored by hedge funds to profit from market volatility.

On Monday, it froze a trading account linked to Citadel Securities, a unit of the U.S. group that also owns hedge fund Citadel LLC - the first time in the crackdown that a foreign firm confirmed one of its Chinese accounts had been suspended.

Citadel said it complied with all local laws and regulations.

"This is apparently aimed at increasing the cost of shorting and easing selling pressure on the market," Samuel Chien, a partner of Shanghai-based hedge fund manager BoomTrend Investment Management Co, said about the new rules.

He added, though, that short-selling was already difficult, referring to other efforts to limit the practice. Apart from Citic, other brokerages have limited short-selling.

Many fund managers say the campaign against shorting has decayed into a general crackdown on risk management strategies, which could backfire. By denying investors tools with which they hedge their share holdings, they are inadvertently encouraging them to sell those stocks.

"In recent days we have been often asked by mainland regulators not to hold short positions in index futures," said a Chinese derivatives trader at a European bank in Hong Kong.

He said regulators insisted these short positions be closed even if they were covered by corresponding long positions. "If we tell them that if we do that, we will have to sell our cash holdings, thus exacerbating the very volatility they want to prevent, they don't seem to understand."

The CSRC did not immediately respond to a request for comment.

The market turmoil, and Beijing's stumbling efforts to restore confidence, are also playing out against the backdrop of a slowing economy and worries over high corporate indebtedness.

China's Commerce Ministry said on Tuesday that import growth was likely to remain at a low level. Weak import growth is considered a sign of sluggish domestic demand.

Factory activity shrank more than initially estimated in July, contracting by the most in two years as new orders fell and dashing hopes that the economy may be steadying, a private survey showed on Monday.